Tyler James Williams dated Keke Palmer in 2008, the couple was closely followed by the paparazzi for one and a half years until they split in 2010.

Currently, he is a dating singer-songwriter, Karina Pasian, and recently released a music video with her. 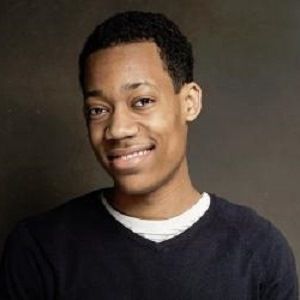 I got started acting by going to auditions that my mom found in the entertainment section of our local news paper. Then, I got a manager and started going out on more auditions

I have a saying: 'I'm good for three things: making fried bologna sandwiches, making money and picking out good movies.'

Who is Tyler James Williams?

Likewise, he has also had a supporting role as Noah on AMC’s The Walking Dead, and on Criminal Minds: Beyond Border.

Tyler was born in  Westchester County, New York, the United States on October 9, 1992, to parents Le’Roy Williams and Angela Williams. His father is a police sergeant and his mother is a singer and songwriter.

His birth sign is Libra. Unfortunately, there is no information about his education and academic achievements.

On talking about his profession, Tyler James Williams starred for the first time on television as a voice actor in the show ‘Little Bill’ portraying the character ‘Bobby’. Similarly, he went on to replace Devon Malik Beckford in 2000 for a short period as the character. From 2000 to 2005, he also portrayed his own character in the children’s television series ‘Sesame Street’.

Then, he gained recognition with ‘Everybody Hates Chris’. The show ran from 2005 to 2009 and spanned 88 episodes. Whereas, he developed as a performer on the show, making it his first groundbreaking performance in a television series. During 2006, he also voiced a blue teammate in the movie ‘The Ant Bully’. After the last season of ‘Everybody Hates Chris’ in 2009, he also landed guest roles in the TV series ‘The Cleaner’ and ‘True Jackson, VP’.

Likewise, he also played Charles Goldfinch or Charlie in the 2006 Christmas comedy film ‘Unaccomplished Minors’ also known as ‘Grounded’ in the UK and Ireland. Even though the movie didn’t do too well, his performance in the film was noticed.

During 2010, he also became a thorough voice actor with his stint in ‘Batman: The Brave and the Bold’. In 2012, his television film ‘Let It Shine’ became a major hit. Not only did he put on a stellar performance, but he also put his music skills to use in the musical drama. Moreover, the movie received great reviews from the media and critics.

On the year 2013 saw him playing the role of Simon Peeples in Tina Gordon Chism’s American comedy film ‘Peeples’. During 2014, he also acted in Justin Simien’s satirical comedy film ‘Dear White People’. Whereas, he was also signed as the lead in the film.

The film was based on racial issues and discrimination from the perspective of Afro-Americans. In the same year, he also acted as ‘Noah’ in a recurring role in AMC’s hit horror drama ‘The Walking Dead’. His role spanned ten episodes in the 5th season of the show.

On talking about his lifetime achievements and awards, he won the ‘Best Breakthrough Performance’ for his role in the Hollywood film ‘Dear White People’ at the ‘Black Reel Awards’.

There is no information about his salary. His net worth is around $ 5 million.

There was a rumor that he is going to be a father. Currently, he is no such rumors and controversies regarding his personal and professional life.

On talking about his body measurements, Tyler James Williams has a height of 5 feet 8 inches. Additionally, he weighs is 46 Kg. Tyler’s hair color is black and his eye color is black.