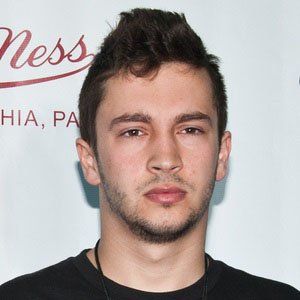 A lot of things you do to cover up insecurities can be just as harmful to you as anything else.

Music can connect people on an intimate level. What Josh and I are trying to do is represent anyone who has some of the questions that we have.

It is true that if you hear our music described, it sounds unappealing. I used to laugh and agree with people when they said it didn't make any sense.

Tyler Joseph was married to Jenna Black since March 28, 2015. They look great together and it seems they are made for each other.

This couple is blessed with a daughter, Rosie Robert Joseph. She was born in Feb 2020. This announcement was done via social media.

Who is Tyler Joseph?

Tyler Joseph is an American singer, songwriter as well as and actor. He is known as the lead vocalist of the band Twenty One Pilots.

Talking about his early life, Tyler Joseph was born on December 1, 1988. He experienced his childhood days with his brothers Zack, Jay, and one sister, Madison in Columbus, Ohio/United States.

He was born into a Christian family and holds English, German, and Dutch ethnicity.

His mother Kelly was a math teacher in Olentangy High school but later she was a coach of the school’s basketball team and his father Chris is also a coach of Worthington Christian High School, where his father was also the principal of the school.

As per his education, he attended Olentangy Junior School.

From Otterbein University, he was given a scholarship for his basketball career but he rejected it when he saw a songwriter performing in the High Street club. Then he started to play the piano which he found in the closet.

Tyler Joseph gave a start to his career when the band name ‘Twenty One Pilots was formed in 2009. He was the creator of the band where he called his school friends Nick Thomas and Chris Salih.

The band ‘Twenty One Pilots’ was named when he was reading  All My Sons by Arthur Miller where it was written about World War II where twenty-one pilots were found dead. They decided to make their debut On December 29, 2009, as a self-titled album which was followed by the Regional at Best in 2011.

In 2009, he has also been on The Tonight Show with Conan O’Brien.

They decided to tour in Ohio along with their band which was called ‘Quiet Is Violent Tour‘. On January 8, 2013, they launched their third album named Vessel. On May 17, 2015, he and his band decided to launch their fourth album Blurryface.

After all the hard work they finally received the Best Pop Duo/Group Performance for stress out at the 59th Annual Grammy Awards.

He has also done backing vocals to the song ‘Sickly Sweet Holidays‘ by Dallon Weekes. He and his band are one of the rising sensations of the music industry.

This singer and model’s net worth is estimated at around $16 million. Moreover, his salary as a musician is around $49k per year.

Talking about the rumors and controversy, in the 59th Annual Grammy Awards he and his bandmate took off their pants.

They went to the stage to receive Best Pop Duo/Group Performance for stressed out this new was one of the great highlights of the Grammy.

Moving towards his body measurements, Tyler Joseph has a height of 5 ft 9 inches and his weight is 65 kg.

He has Dark brown hair color and eye color. His chest size is 37 inches, his 13.5 inches, and his waist size is 31 inches.

He has a three-part tattoos ‘something that saved his life but he does not want to expose it on the internet but he can tell it one by one if it’s asked of him.

He and his bandmate also have an “X” tattoo on their body, which was dedicated to their hometown fans in Columbus, Ohio.

One of the popular vocalists Tyler is active in various sorts of social media.