Tyler Labine is an actor, comedian working in NBC NewAmsterdam, Hunk on #VoltronLegendaryDefender. 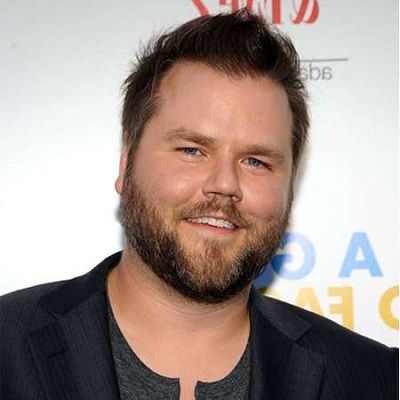 I think there's this new kind of character

it's a sidekick-slash-leading man role. People like Zach Galifianakis and Seth Rogen have been really successful in those roles. You don't have to be this square-jawed, chiseled, deep-voiced Superman

you can be funny and normal and put in the leading man category.

It's hard when you put a year of good work into something and someone at the top says no, and they pull your show's title off a bulletin board and chuck it in the trash.

I'm hoping that maybe I'll start getting a reputation for being a guy who can be pretty versatile. That's the challenge and the fun of being an actor. I love getting to play and do different things.

I spend a lot of time on TV doing the same sort of thing. I found a niche in TV where people are willing to steadily employ me to do this one thing, which I put spins on and change.

Tyler Labine has been married to Carrie Ruscheinsky since 2nd June 2007. His wife is an actress and producer. The couple has three children, but the names are disclosed.

Who is Tyler Labine?

Tyler Labine is a Canadian actor and comedian. Likely, he is best known for starring in the television series Breaker High, Invasion, Reaper and Deadbeat, and the film Tucker & Dale vs Evil.

Tyler Labine was born in Brampton, Ontario, Canada, but grew up in Maple Ridge, British Columbia.on April 29, 1978. His birth name is Tyler Sean Labine and he is currently 43 years old. His (father’s and mother’s name is unknown). There is no much information about him and his family.

Talking about his profession, Tyler made his first appearance at a young age through a TV series called Street Legal as Aaron Wineberg in 1991. Since then he has appeared in many TV series like The ‘Odyssey’, ‘Road to Avoniea’, ‘Madison’, ‘Are You Afraid of the Dark?’ And ‘The Commish’.

In the year 1996, Labine made his film debut through Robin of Locksley as Little John followed by Sabrina the Teenage Witch as Mark. In the year 2008, he appeared in films like Control Alt Delete and Zack and Miri Make a Prono. From 2007 to 2009, Labine starred in a comedy TV series called Reaper.

Labine has an estimated net worth of around $2 million and he has earned that sum of money from his professional career.

Currently, there are no desperate rumors regarding Tyler’s personal and professional life. It seems he is doing the best job without harming others for which he hasn’t been a part of controversy yet.

Tyler Labine has a height of 6 feet and he weighs is 77Kg. Tyler’s hair color is light brown and his eyes color is grey.