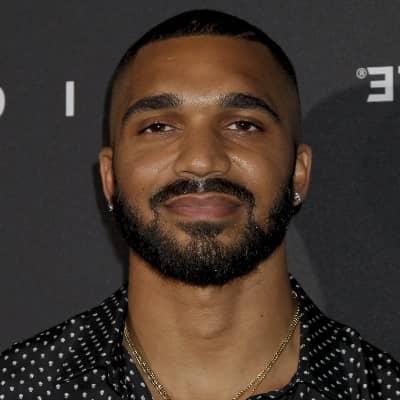 After the rumors of him being gay constantly hit the internet, Lepley spoke about his relationship.

He surprised his fans by admitting that he is dating a girl for a long time in the interview with The Beat ATL on 13 March 2019. Moreover, he also shared about the son they share.

However, there is no information about his partner behind that she is also from the entertainment industry. They had put their relationship secret from the media.

Who is Tyler Lepley?

Tyler Lepley is an American actor, rapper, and personal trainer.

He is best known for portraying Benjamin “Benny” Young on Tyler Perry‘s soap opera The Haves and the Have Nots.

Tyler was born on March 24, 1987, in Philadelphia, Pennsylvania, U.S. He is of mixed race. Lepley has Italian descent from his mother’s side and Jamaican from his biological father’s side

His mother’s name is Jennifer Lepley. His biological parents separated when Lepley was just 6 yrs old. After that, he was raised by his mother and stepfather, Charles Jen Dinnas.

He seems to be a single child of his parents.

Tyler has his schooling from Central Bucks High School West in Doylestown. During their school days, he was engaged in various sports like track, football, basketball, karate, boxing, and so on.

Lepley shared that he was teased by various other children in the school being only the black kid there.

He was selected as the MVP at the sports camp for Villanova University. Although, he attended Kutztown University on a football scholarship. He graduates from Kutztown in 2010 with a degree in criminal justice.

Lepley used to play football in his initial days. He played from the name Tyler Dinnas in high school. He suffered an injury in 2003 and underwent surgery. it nearly ended his football career.

Likely in 2004, Lepley was selected as the MVP at the sports camp for Villanova University. He played from the university up to 2007.  He along with his other player was suspended for the attack and also breaking his jaw.

Afterward, he was reinstated to the college, his football career was over. After finishing his graduation Lepley moved to Los Angeles in 2011. Then he started working as a personal trainer at Iron Fitness Gym in Santa Monica.

Working in the gym, he was discovered by a producer and was invited to the auditions. With the surprise, he gets to receive the lead role in an independent horror movie, Slumber Party Slaughter in 2012.

After that, he undertakes various acting classes and started his acting career professionally. He made his debut from an episode of The CW’s 90210. In 2013, he landed the role of Benny on Tyler Perry’s The Haves and the Have Nots and also appear in Baggage Claim.

He gets to fame after portraying the main role of Jaxon Holley in the 2016 TV film Ringside. In 2019, he was cast as Diamond in the Starz drama, P-Valley. Likewise, his recent work was performing in the Untitled Tracy Oliver Amazon comedy series.

The actor has already made a net worth of around $1.5 million from his career. With various upcoming works, his net worth will surely go to rise.

Lepley resides in his house in San Fernando Valley which worth around $1.5 million. Moreover, he just owns a Lamborghini car which he flaunts on his Instagram post the day before on 24th June.

After premiering The Haves and the Have Nots in 2013, there were various rumors of Lepley being gay and also having affair with Tyler Perry.

Lepley even elaborated that the rumors got started with the night soap, and also said that it affected his latest work.

Despite the gay rumors, both of the men made their statements and shown actions that contradict them. Lepley mentioned not being single likely perry was seen with pictured with her longtime girlfriend.

Being a physical trainer at the gym, he evidently possesses natural six-pack abs and a muscular body.

He stands with a height of 6 feet(1.83m) and weighs around 80 kg.  Likewise, the actor has black-colored hair with dark brown eyes.

You may also read the bio of Demond Wilson, Jacob Scipio, Karimah Westbrook, and Alvaro Morte.