Tyler Mane is a retired professional wrestler. He is married to an actress Renae Geerlings

Tyler Mane is living a blissful conjugal life. He is married to an actress Renae Geerlings who is his second wife. Together they have done several films like “Halloween II” and “Compound Fracture”.

The couple tied the knot on September 3, 2007 however, they don’t have any children as of now.

Previously, he was married to Jean Goertz on September 19, 1988. Together they have also two children. However, their marriage didn’t long-lasted and split up on August 21, 2003. 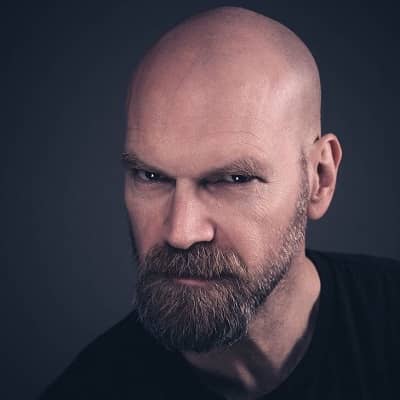 Who is Tyler Mane?

Tyler Mane is a retired professional wrestler from Canada. He has currently turned into a character actor who is best known for playing Sabretooth in X-Men, Ajaz in Troy, and Michael Myers in the remake of Halloween and its sequel Halloween II.

Presently, he is filming Post-production films like Psychosis, Dead North Witchula, and The Horror Show.

Tyler’s birth name is Daryl Karolat but he is better known by the name Tyler Mane. He was born in Saskatoon, Saskatchewan, Canada on December 8, 1966.

The name of his parents is Evelyn Jessie (mother) and Harry Karolat (father). Talking about his academic background, he graduated from City Park Collegiate Institute.

His nationality is Canadian and belongs to the mixed ethnicity of German and English.

In 1986, Tyler started his professional wrestling career under the name “Skywalker Nitron” in his native Canada. He had trained with several well-known names including Stu Hart, Red Bastien, and Mando Guerrero. In 1987, he wrestled in Pacific Northwest Wrestling and South Africa where he was subsequently invited to wrestle in the United Kingdom.

In 1996, UWF was dissolved after the death of Herb Abrams then he also decided to quit wrestling.

Tyler made his acting debut through Luchadores de las Estrellas where he portrayed the role of the villain of the movie, El Vampiro Interespacial. He was cast in a minor role in the television series Smokey and the Bandit. Similarly, he appeared in films like X-Men, How to Make a Monster, Joe Dirt, The Scorpion King, Troy, and Hercules.

He made his acting career breakthrough after played Michael Myers in Rob Zombie’s remake of Halloween. He again reprised the role in 2009 Halloween II. Mane has also his own production company named Mane Entertainment, founded in 2010 alongside Renae Geerlings.

Mane has been nominated in the 2020 Grand Jury Award for Best Actor in Feature Film, Bring Me a Dream. In 1990, he won the ‘New Wave Award’ along with another wrestler named Butch Masters.

As of 2021, Tyler has an estimated net worth of around $2 million. Further, his net worth, salary, and other assets are still under review.

As a professional wrestler, Tyler has a muscular body with a towering height. He is 6 feet 9 inches tall and his weight is about 80 kg. His chest, waist, and biceps sizes are 42, 34, and 16 inches.

Likewise, he has brown pair of eyes and brown hair color.

Actor Brad Pitt gets to spend some more time with his children this summer since ex-wife Angelina Jolie is away for work!