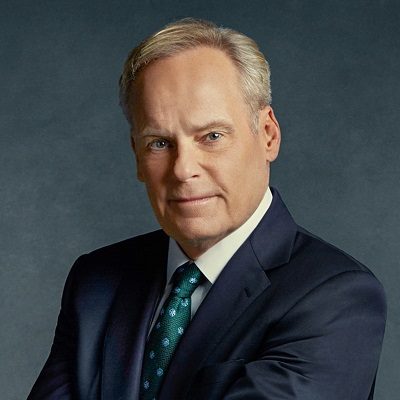 Tyler Mathisen is married to Joanne Lamarca. His wife, Joanne is a producer of talk show, Today. The couple first met in when Joanne was producing one of his shows.

Later, they married in June 2004 at an intimate event.

Previously, he was married to Sally Russell. His ex-wife, Sally was an editor of Skiing Magazine. However, the separation between them is still a mystery.

Who is Tyler Mathisen?

American Tyler Mathisen is a journalist. He is renowned as the co-anchor of the CNBC’s TV Program, Power Launch.

Also, he happens to the Vice President of the Event Strategy of CNBC.

Tyler Mathisen was born on the 4th of September 1954 in Arlington, Virginia to Chris and Mary Mathisen. His birth name is Tyler Chris Mathisen. He is of mixed (Dutch-Danish-Norwegian) ethnicity.

Talking about his educational background, he is a graduate of the University of Virginia. In 1976, he earned a bachelor’s degree from the University with Honors in Government and Foreign Affairs.

During the University days, he was an active member of the societies including Sigma Delta Chi and Raven Society.

After University, Tyler Mathisen started his career as a with the Time-Life. After that, in 1983, he joined the personal finance brand, Money as a writer.

Also, he was an editor of the brand. Besides that, he was also associated with the mutual fund’s department of the firm. He spent 15 years with the firm as a senior and top editor.

In 1987, he was associated with New York-based WCBS-TV. Also, he won an Emmy Award for a report on Black Money.

Later, in 1991, he joined the morning TV show, Good Morning America as an editor. For personal finance journalism in Caring for Aging Parents, he won American University Investment Company Institute Awards. Moving forward, in 1997, he joined CNBC as an editor.

Since then, he is associated with the network. At the time interval, he has been part of various management positions including the CNBC’s Business News.

Also, he anchored shows like Closing Bell and one-hour documentaries including Supermarkets Inc: Inside a $500 Billion Money Machine, “Death: It’s a Living, and Best Buy: The Big Box Fights Back. Also, he hosted the show, How I Made My Millions.

Currently, he co-anchors one of the longest-running shows of the network i.e Power Lunch. The show was running in 2009. Also, he is the vice president of the Event Strategy of the network.

As of 2020, he has an estimated net worth of $5.5 million. making him one of the top ten richest anchors of CNBC. His earnings as an anchor of Power Lunch ranges from $33k to $148k.

Apart from that, as a vice president of the event strategy of the CNBC makes in the range of $77k to $237k.

Tyler Mathisen has blue eyes with light hair. He stands at a height of 5 feet 10 inches and has an average weight.

Talking about his appearance, he has sharp looks with a square-shaped facial structure. Also, he prefers to be a clean shave.

As of now, he has managed to maintain his dignity as a media personality. Till the date, he has not been through any sort of controversy and scandals that caused a buzz in the media.