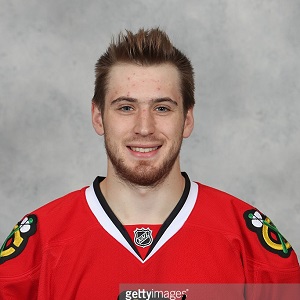 Tyler Motte has kept his personal life private and out of the spotlight. He usually doesn’t talk about his private life in media and public. He prefers people focusing on his work rather than his personal life. He hasn’t mentioned about his affairs publically and has managed to keep it low profile. There is no any record of his marriage and divorce till now.

Who is Tyler Motte?

Tyler Motte is an American ice hockey player. He currently plays as a forward for the Rockford IceHogs in the American Hockey League (AHL), as a prospect to the Chicago Blackhawks of the National Hockey League (NHL). Motte was drafted 121st overall by the Blackhawks in the 2013 NHL Entry Draft.

Tyler was born on March 10, 1995, in Port Huron, Michigan, USA.  He is the son of American parents Nancy Motte and Steve Motte. He has a brother, C. J. Motte. His nationality is American and he is of Native American ethnicity.

Tyler began playing ice hockey with the Detroit Honeybaked U16 team of the Tier 1 Elite Hockey League during the 2010–11 season. After that, he began his collegiate career for the Michigan Wolverines during the 2013–14 season. He scored his first career goal on October 12, 2013, against Jordan Ruby of RIT.

Motte represented the United States at the 2012 World U-17 Hockey Challenge, where he recorded one assist in five games and won a silver medal.  He has also represented the USA at other tournaments. His salary and net worth have not been revealed yet.

He has a height of 5 feet 10 inches with body weight 86 kg. He has light brown hair color and his eye color is brown.