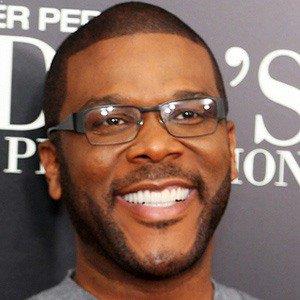 I know my audience, and they're not people that the studios know anything about.

Hollywood is finally waking up to the fact that people who go to church also go to the movies. I'm not sure what took them so long to see that or how long they'll keep it up.

Did you know you can't say 'Jesus' in a sitcom? They told me that and I was like, You gotta be kiddin' me. If you don't want my God here, you don't want me here either. God has been too good to me to go and try to sell out to get some money..It ain't gonna happen.

It takes a week to do a sitcom in Hollywood. I do a show a day in my studio, three or four shows a week.

Tyler Perry dated American Actress Tasha Smith for a brief amount of time. From 2007, he has been in a relationship with Ethiopian Model Gelila Bekele. year.

In September 2014, it was announced that they were expecting their first child. Bekele gave birth to a son, Aman Tyler Perry in November 2014. Perry has not spoken about the future of his relationships.

Who is Tyler Perry?

Tyler Perry is an American actor, comedian, filmmaker, writer, and songwriter. He has created several television shows, his most successful of which is ‘Tyler Perry’s House of Payne’. Additionally, in 1992 he directed, produced, and starred in the musical ‘I Know I’ve Been Changed’.

Perry was born in New Orleans, Louisiana on September 13, 1969, as Emmitt Perry Jr. to parents Willie Maxine Perry and Emmitt Perry, Sr. Additionally, he has three siblings. He had a rough childhood as he suffered years of abuse.  A DNA test Perry took in the 2010s stated that Emmitt Sr. was not Perry’s biological father. He is of American nationality. Furthermore, he belongs to African-American ethnic background.

Talking about his education, Perry did not complete high school, he earned a GED.

Perry initially moved to Atlanta in 1990, where two years later ‘I Know I’ve Been Changed’ was first performed at a community theater. Later, he continued to create new stage productions.

Eventually, he raised a US $5.5 million budget in part from the ticket sales of his stage productions to fund his first movie, ‘Diary of a Mad Black Woman’.

Perry took on the leading role in ‘Madea’s Family Reunion’ in 2006. Furthermore, he also established his own movie and acting studio in Atlanta that year. Some of the other movies and television series that he has been part of include ‘Love Thy Neighbor’, ‘The Haves and the Have Nots’, ‘If Loving You Is Wrong’, ‘Too Close to Home’, ‘For Better or Worse’, ‘Meet the Browns’ among others.

Perry won the Movies for Grownups Award in 2009 for ‘The Family That Preys’. In 2014, he garnered the Hollywood Award nomination for ‘A Madea Christmas’. Additionally, some other award nominations that he has garnered over the years are EDA Award, Black Movie Award, Black Reel Awards, COFCA Award, GFCA Award, Gold Derby Award and others.

Furthermore, awards that he has won throughout his career as of now are AAFCA Award, BET Comedy Award, Black Film Critics Circle Awards, Black Movie Award, BSFC Award, CinemaCon Award, and Image Award among others.

Perry has not revealed his current salary. However, he has an estimated net worth of around $ 600 million.

Perry became part of a controversy after he defended Pastor Joel Osteen, who came under fire when he was accused of closing his 16,800-person-capacity Lakewood Church to victims in the area of the Hurricane Harvey disaster.

Furthermore, he also became part of another controversy due to his feud with Mo’Nique. Additionally, his movie ‘Madea’ also received numerous backlashes along its way. At present, there are no rumors concerning Perry and his career.

Talking about his body measurement, Perry has a height of 6 feet 5 inches or 196 cm. Additionally, he weighs 102 kg or 225 lbs. Furthermore, his hair color is black and eye color is dark brown.

Who Is The Winner Of Miss Universe 2019? Know About Her Bio, Net-worth!!