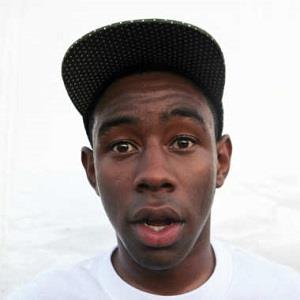 Quick Facts of Tyler, the Creator

Youth is something I never wanna take for granted. I just want to smile and live life.

Relationship Facts of Tyler, the Creator

Although there have been several rumors of Tyler’s relationship with several women over the years, no relationships have been official. At present, he is believed to be single.

Who is Tyler, the Creator?

Tyler, the Creator (Tyler Gregory Okonma) is an American rapper, music video director, and record producer. He is the leader and co-founder of the alternative hip-hop collective Odd Future.

Tyler was born in Ladera Heights, California on March 6, 1991. He has never met his father and throughout most of his childhood years he grew up in the communities of Ladera Heights and Hawthorne, California. Additionally, he became interested in music in his early life. He is of American nationality. Furthermore, he belongs to a mixed ethnic background of Nigerian, African Canadian, and European.

Talking about his education, Tyler attended 12 different schools in the Los Angeles and Sacramento areas in his 12 years of schooling.

Tyler initially worked at FedEx and Starbucks. He took his stage name from a MySpace. Later, he self-released his first mixtape, ‘Bastard’ on December 25, 2009. Additionally, he also signed a one-album deal with XL Recordings.  He released his second album titled ‘Wolf and Loiter Squad’ on April 2, 2013.

Tyler also has several credits as an actor. He has appeared in TV series including ‘The Jellies!’, ‘Uncle Grandpa’, ‘The Jellies’, ‘Axe Cop’, ‘Lucas Bros Moving Co’, ‘Black Dynamite’, ‘Loiter Squad’, ‘The Mindy Project’, ‘Regular Show’, ‘Workaholics’, and ‘Thurnis Haley: Golf Wang’ among others. Some other albums that Tyler has released include ‘Goblin’, ‘Wolf’,’ Cherry Bomb’ and ‘Flower Boy’. Additionally, he has 17 credits as a producer, 25 credits as a director, and 23 credits as a writer to date. Furthermore, Tyler creates the artwork for the Odd Future’s releases and also designs the group’s clothing and other merchandise.

Tyler has not revealed his current salary. However, he has an estimated net worth of around $16 million at present.

Tyler has been linked with several rumors throughout his career. Over the years, he has been rumored to have been involved in relationships with Iggy Azalea and Kendall Jenner.

Additionally, he has been part of several controversies. He has been criticized several times for his use of homophobic slurs, graphic depictions of violence against women, and allegedly misogynistic lyrics.  He also became part of another controversy after he was arrested for inciting a riot on March 15, 2014, at the South by Southwest music festival.

Talking about his body measurement, Tyler has a height of 6 feet 2 inches (1.88 m). Additionally, he weighs around 79 kg or 174 lbs. Furthermore, his hair color is black and his eye color is dark brown.