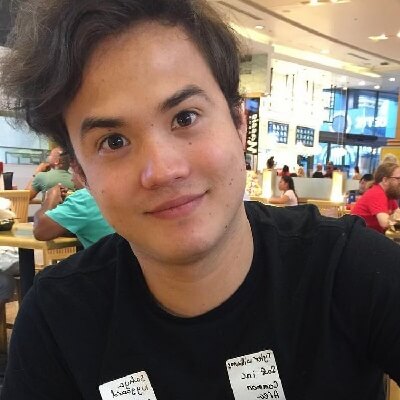 Tyler Williams is a married man. He is married to Safia Nygaard. She is a Youtuber with more than 8.88 million subscribers on her channel and her videos have crossed more than 1.2 billion views in total.

The couple met while the two of them studied at Stanford University. However, they did not date during their college days. After graduating, they met in LA and hung out with friends and ‘friend-zoned’ each other back and forth before eventually dating in 2015. One of their first dates was in Disneyland. Every year, they visit Disneyland together because of this reason. After dating for around 3 years, Tyler proposed to Safia near a well at Disneyland in December 2018.

The couple exchanged wedding vows in November 2019. Safiya posted a Youtube video on her channel on January 5, 2020, which now has more than 12 million views. The ceremony took place in the presence of family and friends at the Carondelet House in Los Angeles. Several Youtubers including Shane Dawson, Jenna Marbles, Ryland Adams, Cristine Rotenberg, Julian Solomita, and Ben Mazowita.

Together, they have a cat named Crusty. They feature on each other’s Youtube videos frequently.

Who is Tyler Williams?

Tyler Williams is an American Youtuber and businessman. His self-titled Youtube channel has more than 1.18 million subscribers. Moreover, he is the CEO and founder of Nextbeat, a digital space allowing for the creation of interactive vlogging experiences.

Tyler Williams was born on May 30, 1990, in the United States of America. His birth sign is Gemini. As of 2020, his age is 29. He has not revealed much about his early life and family background. There is no information about his parents. Similarly, he has not revealed anything about his siblings.

He loved sports like swimming and water polo from a young age. Moreover, he also loved singing. His ethnicity is Caucasian.

Talking about his education, he went to ‘The Haverford School’. At Haverford, he played sports such as water polo and swimming for 4 years. Then, he learned Latin and Chinese at ‘Haverford’ and was a member of its choir.

Following that, he majored in economics from ‘Stanford University.’ There, he continued his passion for singing. He also performed with Stanford’s a cappella group, ‘Fleet Street Singers’.

After earning his graduation from Stanford, he landed the job of corporate analyst of finance at ‘The Walt Disney Co.’ in Burbank. After working there for more than a year and a half, he served as ‘Disney’s global business analyst for 10 months. Following that, he laid the foundation of the application named ‘Bubl, Inc.’ in L.A. in November 2014. He and two software engineers from Stanford started working to develop a media app. They aimed to develop an app that would allow its users to create videos and photos within a temporary social circuit that would exhaust after a day.

The app was upgraded to a live-video media platform that allowed its users to share experiences in real-time. In July 2015, he launched ‘Nextbeat’ which is an interactive digital space to create interactive vlogs and videos in real-time.

On December 6, 2016, he started his self-titled Youtube channel. He started off with a series of ‘Try It Yourself’ videos where he created things he had never made before. The series became popular and gained a lot of viewers and later it started featuring food tasting videos.

As of May 2020, his channel has more than 1.18 million subscribers and his total video views have crossed 61.7 million views.

How much is Tyler Williams worth?

Tyler Williams has an estimated net worth of around $350k. His annual income from Youtube is estimated at around $40k.

Williams stands at a height of around 5 feet 7 inches. He weighs around 63 kg. His hair color is brown, and similarly, his eyes are also brown in color.

Tyler has not been involved in any controversies. He has been able to keep himself away from any type of controversy and scandal. So far, he has not done anything controversial in his career. Similarly, there are no rumors about him.

You may also like to read the Bio, Career, Net Worth, Body Measurements, and more about Shane Dawson, Jenna Marbles, Ryland Adams, and more.