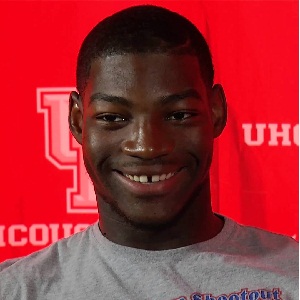 What is the relationship of Tyus Bowser?

Tyus Bowser is possibly single. There isn’t any information regarding him being in a romantic relationship that we know of.

He is currently more focused on his career goals than being in romantic relationships.

Who is Tyus Bowser?

Tyus Bowser is an American football player who is active in the professional football league since 2017. He is best known as the player for the Baltimore Ravens of the National Football League (NFL).

He plays the linebacker position.

American football player Tyus seems to be a pretty private person who hasn’t much revealed regarding his personal life.

All we were known is, that he was born in Tyler, Texas on 23 March 1995. He is of All-American ethnicity and has an American nationality.

His father is Ray Davis and his mother is Sonia David.

Bowser studied at  John Tyler High School in Tyler, Texas, and attended the University of Houston to play college football.

He finished his career with 137 tackles and 22.5 sacks and played in four games over two seasons for the Houston Cougars basketball team. He stands 1.91 m and weighs 112 kg.

Talking about the career journey of Tyus Bowser, he started playing football professionally in the league in 2017 and he is still active in it. He received an invitation to Senior Bowl and made four solo tackles as a part of the South team.

Tyus also participated at Houston’s Pro Day and chose to only run the short shuttle and positional drills. He started playing football professionally after being selected by the Baltimore Ravens in the second round (47th overall) of the 2017 NFL Draft.

On 5 May 2017,  he signed a four-year contract of $5.57 million with $3.37 million guaranteed and a signing bonus of $2.19 million. Since then he is playing for team Baltimore Ravens in the Lineback position. He hasn’t been traded to any other teams in the NFL.

Bowser was ranked the fifth-best outside linebacker available in the draft by NFLDraftScout.com, the sixth-best linebacker by ESPN, and was ranked the twelfth-best edge rusher by Sports Illustrated. His success in the career path has paid him well financially.

His net worth varies depending on the various source so for now, we can say his net worth is growing significantly.

Unlike others, he has neither been in a rumor nor suffered a controversy.

Tyus Bowser has a height of 6 feet 3 inches with a bodyweight of 113kg. He has black hair color and his eye color is dark brown.

Also, read a biography of an  American Football tight end in the NFL Aaron Hernandez who is from Bristol, Connecticut, US.