Ueli Steck is a rock climber, author, and mountaineer who has speed records. 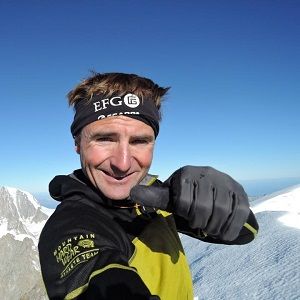 It’s the feeling of total control. When you are properly trained, your body works hard — but when you move, you do not suffer. That’s the feeling I am looking for.

I like to be alone. I am focused on what I am doing. I feel the nature and I feel my body. It's so simple.

When you get to the summit and you push the watch, first you try to breathe a little bit and get some oxygen in your lungs. When I saw this time I was like, 'Ah, that's not possible.' Yeah...that was a good moment.

You just see your hands, your ice axe, and your crampons...and they have to just move.

Ueli Steck was married to Nicole Steck in 2008 until his unfortunate death. As he had a reserved and secretive personality, he had not revealed much about his personal and private life.

They did not have any complications until his death as Nicole was supportive of his passion despite the danger it had on his life. Also, they had no children from their marital relationship.

Who was Ueli Steck?

Ueli Steck was a rock climber, author, and mountaineer who hailed from Switzerland.

He is best-known and recognized for the speed records he set on the North Face trilogy situated in the Alps. He is also considered as one of the great mountaineers ever to live on this earth.

Unfortunately, on 30 April 2017, this climber passed away suffering from the injury caused by the fall during an acclimatizing of Everest without supplemental oxygen.

Ueli was born on 4 October 1976, in  Ventura, Langnau im Emmental, Switzerland. He was of Swiss nationality but his ethnicity is unknown. His father is Max Steck, whereas her mother’s identity is unknown.

Unfortunately, there is not much information regarding his early life and childhood. However, he developed a keen interest in mountaineering, hiking, and adventurous stuff since his childhood.

Talking about his education and qualification, he has not given any insight into it. It seems that he decided to choose the career over the education qualification.

Steck started his career at the age of 17 achieving the 9th difficulty rating (UIAA) in climbing. In his next year,  he climbed the North Face of the Eiger as well as the Bonatti Pillar situated in the Mont Blanc massif.

Moreover, he set his very first speed record on the North Face of the Eiger in the year 2007 by climbing Eiger in just 3 hours and 54 minutes. Later on, the record was broken by himself to 2 hours 47 minutes 33 seconds in the following year.

Later on, he broke off his ascent to Mount Annapurna in 2008 due to an avalanche threat. After that, he became the first recipient of the Eiger Award for his mountaineering achievements in the year of 2008.

Moreover, he was involved in an altercation along with Sherpas while they were on the west face of Mount Everest which came to the media attention.

After that, he made the first solo climb of Annapurna and earned his second Piolet d’Or award for his achievement.

As a result of his successful career as a TV star, he had amassed a lot of fortune and fame. However, not much attention was given to his salary. He had an estimated net worth of $500 thousand.

Ueli has always earned respect and admiration for the bravery and records he has set as a mountaineer.

He has always loved to be in the arms of nature rather than living in luxury given his celebrity status. Thus, he was never really into achieving unwanted fame and attention starting unwanted rumors and controversy.

Ueli Steck had a great athletic body with average height. He has stated that his ideal weight is 67 kilos or less than 140 pounds. He had light brown hair color and his eyes were also light brown.

Ueli was active on social media sharing his experiences with his fans and admirers all over the world. Currently, his social media accounts are in legacy status with more than 166.6k likes on Facebook and 8.4k followers on Twitter as of now. Also, he has 26.7k followers on his Instagram.

After his death, many fans expressed deep sympathy and pain for losing one of the greatest mountaineers in his social media accounts.