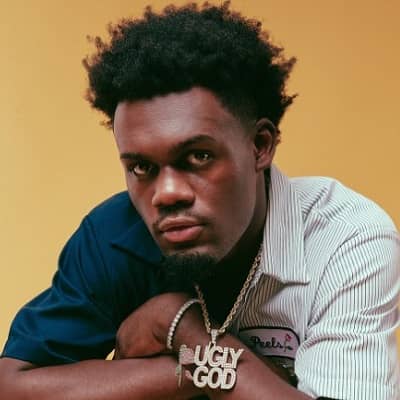 It actually feels amazing to actually drop a body of music that, you know, I worked and put my all into, and that I'm super comfortable with—it feels fuckin' good.

My mom and dad divorced, so I was raised in the South as a Black person. If you’ve been to the Dominican Republic, you should know they have a lot of Spanish, dark Dominicans. They are Black as fuck just like me. My dad happened to be a Black Dominican and my mom’s Black. African-Americans and Latinos have it rough in the U.S.—I’m both, so I guess I’m double rough.

Ugly God is in a relationship. He is dating a girl named Edith. She is known as the ‘Uglygoddess’ on social media.

Who is Ugly God?

Ugly God is an American songwriter, rapper, and producer. He is best known for his debut single Water, which charted #80 on the Billboard Hot 100 chart in 2017.

This rapper was born on 19 September 1996, in Texas, the US with a birth name Royce Rodriguez. His father belongs to Afro-Dominican, and his mother was African-American.

He attended the University of Southern Mississippi. God has a sister. He belongs to All-American descent.

Earlier, he used to play basketball for his high school team. He kept the nickname ‘Pussy Bacon’ but, later changed it into ‘Ugly God’ due to his parents and social reasons.

Ugly God released his first song I Beat My Meat in his SoundCloud account which went viral. This song garnered over 33 million views, and he gained huge popularity.

The next year, he released his single Water on his SoundCloud account. This single was later released for digital download by Asylum Records on 19 November 2016.

This song peaked #80 on the Billboard Hot 100, and #34 on the Hot R&B/Hip-Hop Songs chart. In 2017, he caught public attention by dropping a disc track Fuck Ugly God targeted at himself. The song was also featured on his mixtape The Booty Tape.

The same year, Rodriguez released his debut mixtape The Booty Tape, which peaked #27 at the Billboard 200. On 9 March 2018, he was featured on the Lil Yachty’s song Boom, which was charted #88 on the Billboard Hot 100.

Afterward, Ugly released his first EP just a Lil something before the album on 23 April 2018. This EP consisted of 4 tracks; WEWANTALLTHESMOKE, Tropics, Leave a Tip and BITCH WHERE MY HUG AT.

God also released singles like ‘Hello’ and ‘Lost in the Sauce’. Later, Rodriguez released his first album Bumps & Bruises on 9 August 2019. The original album has 14 tracks, and the deluxe contains 16 tracks (containing Hello, and Lost in the Sauce) as bonus tracks to the album.

He also collaborated on the song Batman with Tay Keith which holds 59K streams on SoundCloud and over 1 million views on YouTube. He has also collaborated with many producers including Nikko Bunkin, and Red drum.

The average salary of this singer is estimated to be $100,000. Meanwhile, according to some sources, Ugly has an estimated net worth of $2.5 million.

There is no rumor and controversy about this singer. Meanwhile, he has managed to keep himself out of any scandal and controversy. He is doing well in his career.