Uma Thurman is an Academy Award winning actress. Uma is a mother of three children.

Uma Thurman married Gary Oldman in 1990 but her husband loved another woman and used to drink alcohol. They divorced after two years. They didn’t have any children.

She married Ethan Hawke and gave birth to a daughter Maya in 1998 and a son Levon in 2002. But they got divorced in 2005 because Ethan had an affair with the nanny of their children.

She has problems with her circulatory system. But instead, she gave birth to her third child, Rosalind, whose father is a Swiss financier Arpad Busson. In 2008 they started their affair and the couple broke up in 2014.

She is now living single however, it was heard that she appeared with her director Quentin Tarantino but neither the actress nor the director made an official confirmation of their relationship. 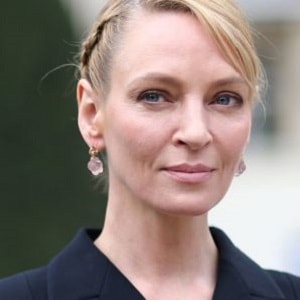 I'm very happy at home. I love to just hang out with my daughter, I love to work in my garden. I'm not a gaping hole of need

Who is Uma Thurman?

Uma Thurman is an American actress and model who has performed in a variety of films, ranging from romantic comedies and dramas to science fiction and action movies.

She is famous for her role in ‘Pulp Fiction’, for which she was nominated for the Academy Award, the BAFTA Award, and the Golden  Globe Award for the Best Supporting Actress.

She was born on April 29,1970, in Boston,  Massachusetts, USA. Her birth sign is Taurus. Her birth name is Uma Karuna Thurman in which her first name ‘Uma’ indicates ‘Splendour, light’ and her middle name ‘Karuna’ means ‘empathy’ or ‘compassion’.

She suffered bouts of body dysmorphic disorder during her childhood. Uma has three brothers, Ganden, Dechen Karl, and Mipam, and a half-sister named Taya, from her father’s previous marriage.

She debuted as a fashion model at the age of 15 and started modeling in ‘Glamour’ and ‘Vogue’. Uma holds American citizenship and her ethnicity is a mix of English, Scottish, German, Scots-Irish/Northern Irish, Swedish and Danish.

She has done her schooling from Amherst High School and in her study period at school, she discovered her love for acting.

She studied Northfield Mount Hermon School before dropping out to pursue a career in acting.

Uma Thurman debuted film with ‘Kiss Daddy Goodnight’, in 1987. She was cast in three movies in 1988: Jonny Be Good, The Adventures Of Baron Munchausen, and Dangerous Liaisons. She is recognized by critics and audience from her drama ‘Dangerous Liaisons’ where she played the role of a naive young woman seduced by a manipulative man.

This actress cast to play an innocent, wife of an American writer Henry Miller, in ‘Henry and June’ directed by Philip Kaufman. The picture became a great success and her acting was highly appraised,

Thurman portrayed ‘Mia Wallace’ in Quentin Tarantino’s black comedy ‘Pulp Fiction’ in 1994 and the fil crossed US $13.9 million worldwide and she was no, nominated for the Golden Globe and the Academy Award for her Best Supporting Actress and she launched into the celebrity A-list.

She is being recognized as the actress, capable to deliver complex challenging roles, solely relying on her acting skills and not beauty.

This actress has a net worth of $45 million as of 2022, and her salary is still under review.

Uma and Quentin rented one villa for two of them. They hold their hands and Uma put her head on the shoulder of Quentin. Everyone who saw them felt the relationship between them. But neither the actress nor the director declared their romantic relationship.

How tall is Uma Thurman?

Uma Thurman has a height of 5 ft 11 inches and weighs 64 kg. Her eye color is blue and she has blonde hair.