Ur mom Ashley is a Video Creator from the Philippines residing in the US. Ashley and her ex-Charles have split. 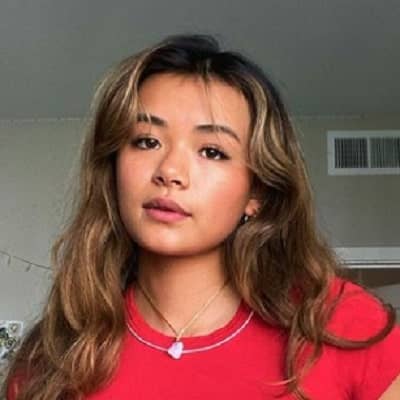 Quick Facts of Ur Mom Ashley

Relationship Facts of Ur Mom Ashley

Ur Mom Ashley is possibly single. But recently, she was seen going out with her roommate, Kelly Wakasa that fired the news of her dating him.

Moreover, this duo is seen posting their pictures on digital platforms.

Previously, she was in a relationship with Charles Haguisan.

They went to the same elementary school and met there for the first time. They dated in Nov 2016. Charles hails from the Philippines and later migrated to the US.

Sadly, the couple is not together anymore. She announced her breakup in November 2021 on a podcast. She was quite open about her relationship on her social media handle but after her split, she deleted all the pictures with her ex-bf and has no plan to get together.

She was living with her ex-Charles previously but now she has moved with her friends leaving his apartment.

Who is Ur Mom Ashley?

Ur Mom Ashley is a content creator, YouTuber, and internet personality. The star is popular for her content of fashion and sneaker hauls, styling tips, and challenges that she posted on her Youtube channel.

Ashley was born on October 23, 1999, in New York and later moved to the USA. She is of Mixed (English and Korean) descent.

Her father’s name is Edward Alexander. She has post different childhood photos with her dad on her Instagram wishing him for father’s day. Likely her mother’s name is not known but she has been featured on her channel.

She has a brother named Andrew Alexander and a sister named Amber Alexander. They both are featured on her channel and have their own channel too.

Asley studied for one semester at George Washington University. And then she went to study at Rensselaer Polytechnic Institute (RPI). She has her major in Business Administration and Management and also minor in Psychology. She is in the last semester and will be graduating soon.

The star launched her Youtube channel on April 18, 2013. She posted various Challenges, Vlogs, Hauls/Fashion, and Beauty on her channel. Her first video was, “HUGE TRY-ON THRIFT HAUL”. She posted it on Jan 8, 2018. Likely, her most-watched video is, “how to tame your FRIZZY hair” with more than  2.1M views.

The Youtuber created another Youtube channel, aaashleyk on Oct 30, 2020. It contains three videos (“AMONG US with AMBER!!!”, “.00001 IQ Among Us w/ EPIC GAMER ANDER”, “CLUTCH AF SISTER IMPOSTER DUO WIN”) with respective 188K, 65K, and 17K views as of now. She has posted gaming videos and streams on this channel. It has amassed 12.4K subscribers.

Ur Mom Ashley: Salary, Net Worth

Ur Mom Ashley has amassed a net worth between $100K-1 million. The star also earns from poshmark, merchandise, promotions, and various brand endorsements. Other information about her earning is not available.

Ur Mom Ashley has openly spoken about Asian discrimination in the US. From Asian kids to old people nowadays are has been experiencing racism and crimes.

Similarly, she revealed that a man approached her and insulted her family with racist remarks.

Ashley stands tall with a height of 5 ft 4 inches. She has naturally black hair which she prefers to dye into brown and blonde.

Likely, she has fair skin with dark brown-colored eyes. Talking about her body measurements, it is 26-30- 34 in.

Ur Mom Ashley has accumulated over 434K followers on her Instagram account. She joined Twitter in Aug 2018 and has more than 9.6K followers now. Furthermore, she has another Twitter account, “extra dynamic” which was created in May 2020 and has over 1K followers.

Likely, her official Tik Tok account holds 300K followers with more than 9.7M likes. She is also active on Twitch with 20.3K followers. Similarly, she has the main YouTube channel with 976K subscribers and another with 12K subscribers.

Also, get to know about Lauren Manzo, BabyMagic, and Rosie Pierri.