He has also worked as a head coach for the Bowling Green Falcons, the Utah Utes, and the Florida Gators.

Urban Meyer is a married man. He is married to Shelley Mather Meyer. He met Shelly at Sigma Chi’s Derby Days philanthropy event when Shelly was a freshman nursing student.

The pair married on 8 July 1989. The couple has three children together, Nicole, Gisela, and Nathan. Their marriage is going strong as there is no news regarding any extramarital affairs at present. 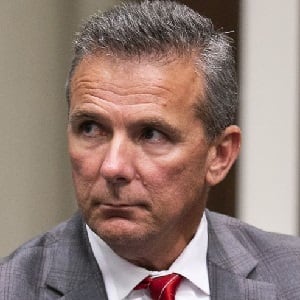 I’ve come to learn that leadership is not automatically granted to you because of your position or your salary or the size of your office. Leadership is influence based on trust that you have earned. A leader is not someone who declares what he wants and then gets angry when he doesn’t get it. A true leader is someone who is going someplace and taking people with him, a catalyst for elite performance who enables people to achieve things they wouldn’t achieve on their own. A leader is someone who earns trust, sets a clear standard, and then equips and inspires people to meet that standard.

Giving up on somebody takes nothing. Helping them change takes a tremendous amount of time, energy, discipline, and love. In the end, it's worth it.

Who is Urban Meyer?

Urban Meyer is an American college football coach. Previously, he was a player and currently, he is the head football coach of the Ohio State Buckeyes. Additionally, he has also worked as a head coach for the Bowling Green Falcons, the Utah Utes, and the Florida Gators.

Meyer was born as Urban Frank Meyer III in Toledo, Ohio on July 10, 1964. He was born to parents Bud and Gisela Meyer. Additionally, he developed a keen interest in football since his childhood years. He is of American nationality. Furthermore, there are no details available about his ethnicity at present.

Talking about his education, Meyer attended Ashtabula’s Saint John High School. In addition, he also attended the University of Cincinnati and has a bachelor’s degree in psychology.  Furthermore, he also earned his master’s degree in sports administration from Ohio State University.

He became the head coach at The Ohio State University on November 28, 2011. Additionally, his first head coaching job at Bowling Green was in 2001. Meyer had a 17–6 overall record for the Bowling Green. Furthermore, he took the job at the University of Utah in 2003.

Meyer has also served as a head coach for the University of Florida. He finished the 2005 season 9–3. Additionally, he also coached the Gators to a 13–1 in 2006 and 9–3 in 2007. After resigning from Florida Gators, Meyer worked in ESPN as a college football commentator and analyst.

He accepted the job as Ohio State’s head football coach on November 28, 2011. More recently, in the 2018 season, he was placed on paid administrative leave by Ohio State. Apart from his career in football, he has also been part of numerous philanthropist work.

Meyer’s current salary is $ 7.6 million. Furthermore, he has an estimated net worth of around $ 20 million at present.

Meyer became part of a controversy after he was suspended for three games after the school investigated his handling of allegations of domestic abuse involving Zach Smith. At present, there are no rumors concerning Urban and his career.

Talking about his body measurement, Meyer has a height of 6 feet 3 inches. Additionally, his hair color is black/grey and his eye color is dark brown.

What is Urban Meyer salary?

What did Urban Meyer do in the bar?

Who is Urban Meyer's daughter?

Who is Urban Meyer's wife?

Foster girlfriend or boyfriend!!! Newly-coined dating slang term! What does this term mean?