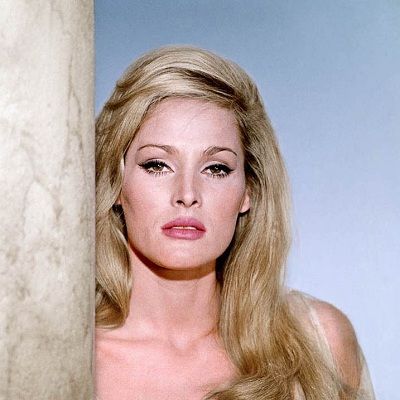 When I love a man, I live only for him. I become his slave.

it doesn't bother me.

In 1955, Ursula Andress dated film icon James Dean shortly before his death. That same year, she began an affair with actor/director John Derek, a married father-of-two who walked out on his wife, Pati Behrs.

She had glamorous relationships with Jean-Paul Belmondo, Ryan O’Neal, and Fabio Testi.

In 1979, Andress was in a relationship with American actor Harry Hamlin after meeting on the set of Clash of the Titans. She gave birth to their son, Dimitri Hamlin, on 19 May 1980.

After she gave birth to a son at age 44, she moved into close friend Linda Evans’ Coldwater Canyon home until hers was ready. Although engagement was announced, the couple never married. In 1983, Hamlin broke up with her.

Who is Ursula Andress?

Ursula Andress is a film and television actress, former model, and sex symbol. She is popularly known for her breakthrough role as Bond girl Honey Ryder in the first James Bond film, Dr. No.

She later starred as Vesper Lynd in the James Bond parody Casino Royale.

She was born on 19 March 1936, in Ostermundigen, Switzerland. Andress’s father’s name is Rolf Andress, a German diplomat who was expelled from Switzerland for political reasons.

Her mother’s name is Anna who is a landscape gardener. Andress has a brother, Heinz and four sisters, Erika, Charlotte, Gisela, and Kàtey.

She belongs to Swiss nationality. There is no information about her ethnicity.

Until she was 16, she went to school in Berne and became fluent in French, German, and Italian. She studied art in Paris.

Ursula Andress started her career in 1955. In 1955, she was successful and appeared in The Sins of Casanova. It was announced that she signed to Columbia Pictures in March 1956 and she made no films for them either. She was Miss World Trade of 1956.

In 1963, Andress followed it playing the female lead in an Elvis Presley musical, Fun in Acapulco. Andress starred opposite Marcello Mastroianni in the science fiction movie The 10th Victim in 1965. In 1966, she returned to Hollywood to play George Peppard’s love interest in the World War One film, The Blue Max.

Furthermore, she made her second film for Seven Arts: another with Derek, who again starred and directed, Once Before I Die (1966), shot in the Philippines. In 1967, Bond satire Casino Royale also produced by Feldman, where Andress played Vesper Lynd, an occasional spy who persuades Evelyn Tremble, played by Peter Sellers, to carry out a mission. It was a big box office.

Moreover, between 1969 and 1979, she went on to appear nude or semi-nude in nearly all of her film roles, earning her the nickname “Ursula Undress”. she played the role of  Aphrodite in The Clash of the Titans. Similarly, she played different roles in different movies up to 2008.

In 1995, Andress was called by Empire magazine as one of the “100 Sexiest Stars in film history.” Her last role to date was playing “Madonna” in the low-budget 2005 Swiss feature Die Vogelpredigt order Das Schreien der Mönche (English title: The Bird Preachers).

She was nominated by Henrietta Award for world film favorite female in 1966. In  1964, she wins Golden Globe for Most Promising Newcomer Female.

In the same year, she was nominated by Golden Laurel for Top Female New Face. She wins the CinEuphoria for Honorary Awards in 2019.

Andress’s impressive career spans over five decades with appearances in some of the terrible movies of the last century. Her estimated net worth is put at $25 million.

The Internet is buzzing with rumors that this actress could be cast as the female lead opposite Daniel Craig.  Andress death hoax spreads on Facebook. She supposed demise gained traction on Wednesday after a ‘R.I.P.

Ursula Andress has Blonde hair color and Light Brown color. Her height is 5 feet 5 inches and her weight is 57 kg.