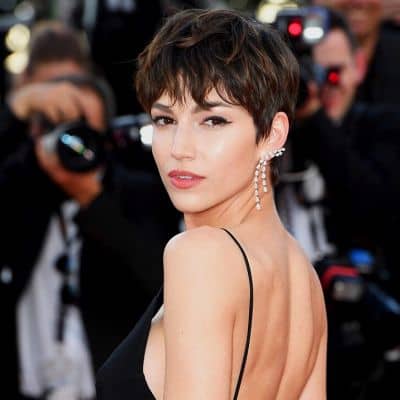 Talking about her love life, Ursula Corbero is presently in a relationship with Chino Darin. Chino is a well-named actor and producer. They met on the set of the TV show, La embajada in 2016.

Previously, she was dating Andres Velencoso. Andres is also a Spanish actor. They started dating in 2013 and were together for almost three years before ending their relationship in 2016.

Before that, the star was in a relationship with Israel Rodriguez. The former couple was together in 2008 and were spotted together at various award ceremonies. They split up in 2010.

Friendly Fact: Ursula aka Tokio and her reel boyfriend Miguel Herrán aka Rio are very good friends in real life. They are BFF. And they keep posting photos of one another on their IG handle with lovely captions.

Who is Ursula Corbero?

Ursula Corbero is a well-recognized Spanish actress and model. Corbero is widely famed for her role as Ruth Gomez in Fisica o quicima(2008-2010), Margarita de Austria in the television series, Isabel(2014), and Marta in the comedy film, Como Sobrevivir a una Despedida(2015).

Moreover, she earned international fame for her role as Tokyo in the Antena 3 series, La Casa de Papel.

Ursula Corbero was born on 11 August 1989. At present, her age is 31 years old. Likewise, her birthplace is Barcelona, Spain. She spent her childhood in Sant Pere de Vilamajor.

Ursula is the daughter of her father, Pedro Corbero whereas her mother is Esther Delgado. Moreover, she has a sister named Monica. Her dad was a carpenter and her mom was a shopkeeper.

Talking about her nationality, Corbero holds a Spanish identity whereas her ethnicity is Hispanic.

Regarding education, the actress took acting classes as well as flamenco and jazz dance classes. Later, she moved to Madrid to shoot the TV series Fisica o Quimica after her studies.

Professionally, Ursula started her career in the television series Mirali Trencat in the year 2002. She then emerged as Sara in Ventdelpla in 2005-06, and in the series Cuenta atras in 2007. The actress played the most remarkable role of her career in the Spanish comedy-drama, Fisica o Quimica from 2008 to 2011.

In the series. Corbero performed the role of Ruth who is a student suffering from bulimia and earned several awards and recognition. Later, she featured in two short movies, Cronica de una voluntad in 2007 and Slides in 2011. The actress then featured in the lead role of Deborah in the stage production of Perversiones sexuales en Chicago in 2012.

Ursula has also performed in several other series such as Volare in the role of Lila, Gran Reserva, Mario Conde, Los Dias de Gloria. She landed some big roles in Afterparty, Crimen con vista al mar, and ¿Quien mato a Bambi?, Cloudy with a Chance of Meatballs 2.

The actress has portrayed the lead role of Silene “Tokyo” Oliveria in the Spanish heist television series, La Casa de Papel. The series aired on Antena 3 on 2 May 2017 which was then purchased by Netflix.

She has also won the Best Actress award at the Atv Awards and gained a nomination for Best Main Actress in a TV series at Premios Feroz in 2018 for her act in the series.

A talented Spanish actress, Corbero has earned a handsome amount of money from her profession. She has been active in her profession from the year 2002 till the present.

It is reported that Ursula Corbero has an estimated net worth of $3 million.

Ursula has never been part of any controversial matter or rumors till now. The actress has been preoccupied with her professional and private life.

It seems that Corbero prefers enjoying her personal life and does not want to merge it with her professional life.

31 years, Ursula has gorgeous looks, amazing looks, and an admirable personality. She stands at a height of  5 feet 5 inches. Also, she has a balanced bodyweight of 53 kg.

Furthermore, Corbero has dark brown eyes whereas her hair is also dark brown. Her body measurement is 33-24-34 inches(chest-waist-hip) respectively.

Regarding her social media presence, Ursula Corbero is an active personality on social media. Ursula has more than 21.2 followers on her official Instagram account @ursulolita.

She is also active on Twitter with around 908.4k followers.

Moreover, Corbero is also available on Facebook with nearly 281.7k fans and supporters.