Updated On October 23, 2022 | Published By: shahid | In Child , Pregnant , Relationship
Share this 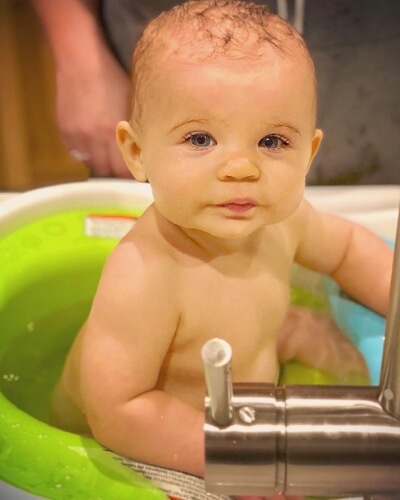 The kid Vaeda Luma is the cute little daughter of Tyler Baltierra and Catelynn Lowell who was born last year. Friday 21 February 2020 was her first birthday.

The proud loving mother Catelynn Lowell uploaded a photo of the adorable and captioned it:

“Happy 1st birthday to our silly, lovely, cuddle bug Vaeda beta butt!!! I cannot believe you are already a year old. you have brought soooo much joy to this family!! I love you with all my heart!!!!!!”

Proud father Tyler too posted a cute picture of the little one on his Instagram and stated the past year after her birth has gone by extremely fast.

“…words could never express the amount of joy & love you have brought into this little family of ours. Happy Birthday tinky butt! We love you so much! #DotingDaddy”

Vaeda Luma: birth and after…

The child Vaeda arrived last year and Tyler had put up a sweet short message on his social media to announce that his wife has delivered. He put a beautiful photo of Vaeda and wrote below:

Just before she turned one, Catelynn had spoken about the marvelous growth of the little child. She had posted a picture of the growing baby and captioned it:

Catelynn now has three daughters and wants a boy next time.

Catelynn who is 27 hails from Michigan. The couple are dating since their high school days. And Catelynn became a teen mom when she delivered her first child, a daughter named Carolyn “Carly” Elizabeth Davis on 18 May 2009.

Five years later, the couple announced in August 2014 that Catelynn was pregnant with their second baby. Their second daughter Novalee Reign was born on 1 January 2015.

And the couple walked down the aisle on 22 August 2015. Her Teen Mom co-stars attended her wedding. These included Maci McKinney (nee Bookout) and her husband Taylor, Amber Portwood, and then-fiancé Matt Baier, and also Teen Mom 2 star Kailyn Lowry and then-husband Javi Marroquin.

Catelynn miscarried in 2017 and later on 13 September 2018, the couple announced her third pregnancy.

Though Vaeda is just one, Catelynn and Tyler already are thinking of expanding their family further. They want more kids. Catelynn told People:

“My baby fever is insane!”

“We’re not done yet. We just love being parents too much.”

Tyler went on to reveal his wish to have a son. He said:

“But with our luck it probably would be another girl,”