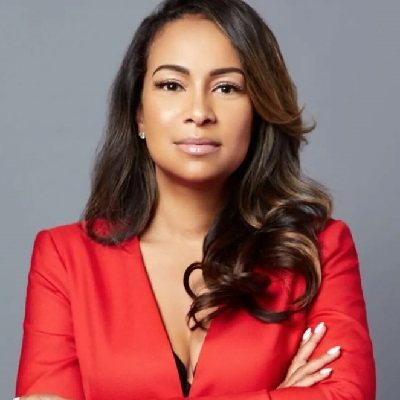 Valeisha Butterfield is married to the baseball player, Dahntay Jones. The wedding took place on the 23rd of July 2011 at the historic Duke University Chapel in Durham, N.C. Jones.

The ceremony was officiated by Dr. Benjamin Chavis. Later, the guests enjoyed the Heaven on Earth themed reception party.

Before that, she was engaged with the rapper, The Game. Later, the wedding was called off in 2006. Together, they have a son, Harlem Taylor.

American Valeisha Butterfield is a business leader. She is renowned as the Chief Diversity & Inclusion Officer of The Recording Academy.

She was the former director & Global Head of the Inclusion of Google.

Valeisha Butterfield was born on the 30th of January 1978 in Wilson, New York in a politically background family. As of 2021, she is 43 years old. She is of British ethnicity.

In 1991, her parents parted ways as a couple via divorce. She has two sisters; Tunya and Lenai Butterfield.

Talking about her educational background, she graduated from Clark Atlanta University with honors in Arts majored in Political science.

After graduating from the University, Valeisha Butterfield joined the HBO network as the executive assistant to the president of the network. In the organization, she held the position for 1 year and three months.

After that, in March 2003, she joined RUSH Communication as the excessive Vice President. Five years later, in January 2009, she left the Communication to join Alzheimer’s Association as National Director of Diversity & Inclusion.

Moving forwards, in October 2009, she became the Deputy Director of Public Affair for the U.S. Department of Commerce. Later, in September 2011, she joined Obama’s campaign, Obama for America as National Youth Vote Director.

In January 2016, she became the Director & Global Head of Inclusion for Google. She served Google for 4 years and 5 months and left the company to join The Recording Academy. Currently, she is the Chief Diversity & Inclusion Officer of the organization.

Apart from that, her earnings as a Director and Global Head of Inclusion range from $38k to $206k.

Talking about net worth, her husband, Dahntay Jones has an estimated net worth of $10 million.

Till the date, she has not been through any sort of controversy that created a buzz in the media. Also, she has remained far from any type of rumors too.

However, she has been in the headlines as she is appointed as the Chief Diversity & Inclusion Officer for The Recording Academy.

The previous chief, Deborah has sued the organization. She claimed that she has been sexually harassed by the general counsel of the Academy. Also, she was put on administrative leave for raising several concerns about the ongoing Grammy.

Valeisha Butterfield has black eyes with black eyes. She has a decent height and average weight. However, details regarding her body stats are no available.

You may also read the bio of Contessa Metcalfe, Heavenly Kimes, and Jelena Đoković.