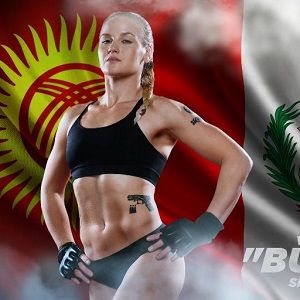 What is the relationship of Valentina Shevchenko?

Valentina Shevchenko is possibly single. As of now, she seems to have totally focused on her career. Besides that, she keeps her personal life away from the media.

Her professional work is all out in the media. But as per her private life including her relationship status or any love affairs are totally secret.

Who is Valentina Shevchenko?

Valentina Shevchenko is a Mixed Martial Artist, kickboxer, plus Muay Thai fighter. Previously, she also fought as a professional boxer.

She is popular by nickname, ‘Bullet.’

She was born as Valentina Anatolievna Shevchenko on March 7, 1988, in Frunze, Kirghiz SSR, Soviet Union. Presently, this area is known as Bishkek, Kyrgyzstan.

She has a Russian ethnic background and She possesses dual nationality as Kyrgyz and Peruvian.

She has not disclosed details about his father but her mother’s name is Elena. Her sister’s name is Antonina Shevchenko.

Combat sports intrigued her from an early age. During her early life, she took several taekwondo lessons. Then at the age of 12, she began learning Muay Thai kickboxing.

As for her academic background, she attended the University of Arts in Kyrgyzstan.

Valentina Shevchenko started taking kickboxing seriously in 2000. Her career rose since then. It was after she won against the 22-year-old opponent in a kickboxing fight.

Although she started her career in 2000, she began fighting as a professional in 2003. In 2003, she competed in 3 different forms of combat sports. They are Muay Thai fighting, kickboxing, and MMA fight. O

n April 21, 2003, she knocked out Eliza Aidaralieva in an MMA fight. Alongside this, she also participated in several Muay Thai and kickboxing fights.

She is now first in the UFC’s women’s pound-for-pound rankings as of December 13, 2021.

Valentina and Berry were both highlighted on the digital cover of the December 2021 issue of Women’s Health.

This sportsperson’s estimated net worth is $5 million.

As per the sources, a kickboxer receives an average salary of around $31k per year.

Valentina is a focused work personality. She knows how to keep her image clean in the media. Consequently, she avoids any rumors or controversies. Currently, there are no rumors related to her.

Valentina Shevchenko has an athletic body. She has a height of 5 feet 5 inches and her body weight is around 61 kg.

And her body figure is 33-35-33 inches. She has blonde hair and light brown eyes.