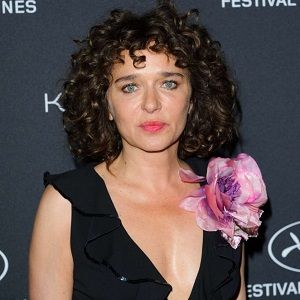 Valeria Golino is an unmarried woman. However, she has dated several men in her life.

Back in 1984, she was in a relationship with Peter Del Monte and stayed in their relationship for a couple of years before breaking up in 1987. A year later, she began dating Benicio Del Toro.

Furthermore, they continued their love life for almost four years and called it quit in 1992. In addition, her name was also linked up with Eric Clapton, Julian Lennon, and Andrea Di Stefano.

Back in 2006, she started going out with actor Riccardo Scamarcio. Moreover, the lovebirds enjoyed their love life for almost 11 years and split up in 2017. Currently, Valeria is single.

Who is Valeria Golino?

Valeria Golino is an actress and director from Italy. She rose to prominence from her role in movies such as Rain Man, Big Top Pee-wee, and Hot Shots!.

Furthermore, she has won the Best Actress award at the Venice Film Festival twice. Some of her notable roles in movies are Honey, Respiro, Kryptonite!, Mario’s War, and a few more.

Valeria was born on October 22, 1965, in Naples, Campania, Italy. Talking about her nationality, she is Italian and her ethnicity is mixed (Italian, Greek, Egyptian).

She is the daughter of Luigi Golino and Lalla Golino.

From the beginning of her childhood, she had a keen interest in acting and also began to learn from a very early age. Moving towards her education, there is not any information regarding her educational background.

Valeria Golino began her acting career when she was just 18 years old in a film A Joke of Destiny in 1983. A year later, she grabbed the role of Francesca in My Dearest Son.

Later, she also appeared in a couple of movies such as Little Flames, A Tale of Love, Detective School Dropouts, and much more. She rose to prominence from her role in movies such as Rain Man, Big Top Pee-wee, and Hot Shots!.

Furthermore, she has won the Best Actress award at the Venice Film Festival twice. Some of her notable roles in movies are Honey, Respiro, Kryptonite!, Mario’s War, and a few more.

Back in 1998, she featured as the girlfriend of Tom Cruise in Rain Man. In 1994, she was also offered the leading role in True Lies, however, she turned down that offer.

Additionally, she also landed the popular roles in the successful French thriller 36, Quai des Orfèvres, and a leading role in Cash. Back in 2016, she was a member of the main competition jury of the 2016 Cannes Film Festival.

Some of her recent ventures are Il colore nascosto delle cose, The Very Private Life of Mister Sim, and An Italian Name.

Being a successful actress, she earns a massive amount of money from her profession. Currently, she has a net worth of $10 million.

As of now, Valeria has won numerous awards in her career including two Best Actress awards at the Venice Film Festival. In addition, she has also received Silver Ribbon Awards, Golden Goble Awards Italy, Annecy Italian Film Festival France, and a few more.

So far, there are not any drastic rumors regarding her personal and professional life. Moreover, she has never faced any controversy in her career to date. It seems she has a full concentration on her work rather than stuck in any controversy.

Valeria Golino has a height of 5 feet 7 inches and her weight is unknown. Moreover, she has a pair of attractive blue eyes and brown hair.

Valeria is not active on social media at all. As of now, she doesn’t hold any of these social accounts such as Instagram, Facebook, and Twitter.