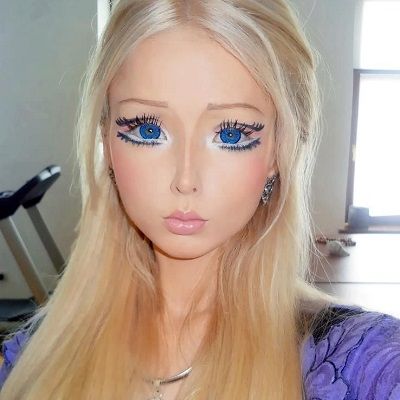 Oh God, no! It's unacceptable to me, the very idea of having children brings out this deep revulsion in me. Most people have children to fulfill their own ambitions, not to give anything. They don't think about what they can give this child, what they can teach her. They just try to shape her according to some weird script-whatever they couldn't do in life, like becoming a writer or a doctor. Or some woman who's almost 30 and thinks no one needs her, she says, 'Oh, I'll have a kid. He will love me and become my reason to live.' And then this kid becomes a soccer ball she and her boyfriend will kick back and forth. I'd rather die from torture, because the worst thing in the world is to have a family lifestyle.

Valeria Lukyanova is a married woman. She is married the Ukrainian businessman Dmitry Shkrabov. He is her childhood friend. But she has said that she does not want to have children.

Who is Valeria Lukyanova?

Valeria Lukyanova was born on 23rd August 1985 in Tiraspol, Moldavian SSR, Soviet Union. She is the daughter of Valery Lukyanov(father) and Irina Pashkeeva(mother). Similarly, she has two siblings Ivan Pashkeev(brother) and Olga Lukyanova(sister).

Likewise, her father was a builder who also worked part-time as a disc jockey and her mother worked for the military sector. Similarly, her nationality is Ukrainian and her ethnicity is Caucasian.

Talking about her education, she has a bachelor’s degree in architecture from Odessa State Academy of Constructions and Architecture.

In the year 2007, she won the worldwide beauty contest “Miss Diamond Crown of the World”. Similarly, the beauty pageant was open to any women had about 300 contestants, and had no rule forbidding plastic surgery or body modification.

Likewise, ABC News suggested that she was a hoax aided by image editing software. Diane Kevin regarded her as an example of the negative effects of media objectification. To counter the image editing accusations, she posted videos on YouTube and appeared on Russia-1 and Channel One Russia TV channels.

Moreover, Valeria Lukyanova is a composer, an opera singer, and has recorded two albums of new-age music. The albums are Sun in the Eyes and 2013 using the name Amatue. After that, she wrote a book, Astral Travel Amatue, about her astral trips which she made available in 2012 as an RTF file to download for free from her website.

Similarly, she had her debut starring role in a feature film in The Doll(2017), a horror movie directed and written by Susannah O’Brien. Talking about her film, it includes Mindy Robinson and Ron Jeremy. It revolves around her character, an escort made from doll parts created by a doctor to recruit others to kill. And the two men who requested her. Further, the movie presented at the Cannes Film Festival in 2017.

There is no information about the awards and nominations won by Valeria.

Talking about her earnings, she might earn a huge amount of money from her career but she has not disclosed her salary and incomes. Similarly, there is no information about the net worth of Valeria.

There were many rumors about her being fake. Similarly, according to Daily Mail, she posted a video where she attacked women whom she perceived as ugly. She said actress Sarah Jessica Parker as horse face and the women who were ugly are too lazy to make themselves beautiful.