Valerie Bertinelli is an actor. She is also a cook who is enthusiastic about healthy recipes which she shared on her website. Valerie is married and has a child. 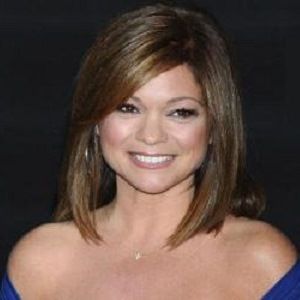 If you say you're fat, all of a sudden people like you!

Happiness is a choice. You can choose to be happy. There's going to be stress in life, but it's your choice whether to let it affect you or not.

Valerie Bertinelli is married to Tom Vitale since 2011, the couple is living a happy together with no marital affairs.

Previously, dated actor Scott Colomby in the late seventies. They were in a relationship for about two and a half years.

She dated Steven Spielberg in 1980, but the relationship didn’t go well so they broke up.

Additionally, she dated Dirk Benedict, but they broke up.

Moreover, she married Eddie Van Halen on April 11, 1981, the couple has a son namely, Wolfgang Van Halen. But the marriage didn’t go well so they decided to divorced in 2007. Her ex-husband, Eddie Van Halen died on 6th October 2020, due to cancer.

Who is Valerie Bertinelli?

Valerie is an American actress and television personality, she is well known for her roles as Barbara Cooper Royer on the sitcom One Day at a Time (1975–84), Gloria. Additionally, she has hosted the cooking shows Valerie’s Home Cooking and Kids Baking Championship on Food Network.

Valerie was born in Wilmington, Delaware, the United States on April 23, 1960, to parents Andy Bertinelli, father and Nancy Bertinelli, mother.

Talking about her education and academic achievements, she attended Clarkston Middle School. Then, she attended Granada Hills High School.

On talking about her profession, her acting career started in 1974 when she worked in an episode of the television series ‘Apple’s Way.’

In addition, she also appeared in two situation comedies as well—‘Sydney’ and ‘Cafe Americain.’ During 2001, she also joined the ‘Touched by an Angel’ cast for the show’s last two seasons.

Moreover, she is also a popular author. During 2008, she also released her autobiography ‘Losing It: And Gaining My Life Back One Pound at a Time’. In 2012, she came up with her book titled ‘One Dish at a Time’.

Valerie garnered the Golden Globe Awards in 1983, TV Land Award in 1979. Additionally, she has received won the award two times, she won Golden Globe Awards for Best Supporting Actress in a Series, Miniseries or Motion Picture Made for Television for One Day at a Time (1975).

In August 2012, she received a star on Hollywood Walk of Fame.

Valerie has a net worth of $ 20 million and the reports are that her salary is around $2 million per annum.

Valerie has not been part of any notable controversies in his career. She is far from rumors and controversies.

Also, read the affair, salary, the net worth, controversy, and the bio of  Erica Rose, Traci Bingham, Emily Rudd