Emmy-award-winning actress Valerie Mahaffey is married and a mother of one. 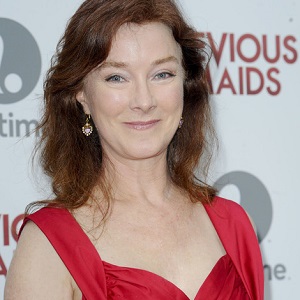 Valerie Mahaffey has been married to Canadian actor Joseph Kell.

They have welcomed a daughter. But they have not revealed the name of their daughter. They are currently living together.

Who is Valerie Mahaffey?

Valerie Mahaffey is an Indo-American TV actress and producer. She is popular for her performance in known in ‘Seabiscuit’ in 2003, ‘Jack and Jill‘ in 2011, and ‘Sully‘ in 2016.

She was born on June 16, 1953, in Sumatra, Indonesia. Her mother belongs to a Canadian mother and her father belongs to Texan, who met in New Brunswick, Canada.

Her family shifted to Austin, Texas, when she was 16 years old. Valerie holds American citizenship and her ethnicity is unknown.

She attended Austin High School and graduated from there. Later, she joined the University of Texas at Austin and earned a Bachelor of Fine Arts in 1975.

Valerie Mahaffey made her Broadway debut in musical ‘Rex’. From 1979 to 1981, she was a regular cast member in the soap opera ‘The Doctors’. In 1986, she starred in the film ‘Women of Valor’ and portrayed women’s roles in the Philippines during World War II.

She started acting in television comedies like ‘Cheers’, ‘Newhart’, and ‘Seinfeld’ in the late 1980s and starred in the short-lived NBC sitcom ‘The Powers That Be’ from 1992 to 1993.

Valerie portrayed the role of Tracy Milford in the film ‘Senior Trip’ and Jan Kempster in the 1997 film ‘Jungle 2 Jungle’. She played the recurring role of ‘ER’ in 1999. She made her appearance in the seven episodes of ‘United States of Tara’ in 2009 and played in ‘Eastern Standard’, ‘Talking Heads’, ‘Top Girls’, and ‘Rex’.

Valerie performed the role of chronic hypochondriac Eve in the CBS series ‘Northern Exposure in 1992 and she was the only actor from the series to win an Emmy Award.

She appeared as the mother of Emma Pillsbury on ‘Glee’ from 2011 to 2013 and co-starred as Fran Horowitz in the drama ‘Monday Mornings’ in 2013. She played a recurring role as Olivia Rice on Lifetime Television comedy-drama series ‘Devious Maids’.

She has an estimated net worth of $100,000 and she has earned that sum of money from her professional career.

She likes to keep her profile low and she has not been involved in any rumors and controversies in her life.

Valerie Mahaffey has got dark brown hair and light brown eyes. She has a height of 5 ft. 6 inches. Other information regarding her body measurement, weight, etc. is under review.