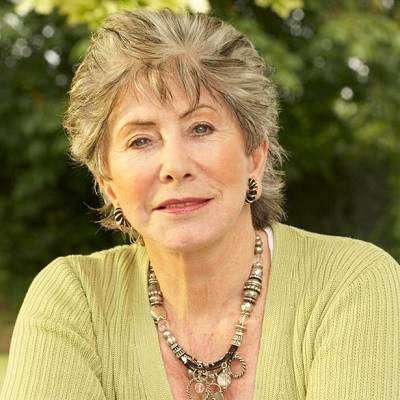 While talking with about previous relationships, she admitted that she had many relationships. However, she also mentioned that those relationships were not deep and sustainable.

Last, she was dating a builder. He was 24 years younger than her.

Who is Valerie Singleton?

British Valerie Singleton is Order of the British Empire rewarded TV and Radio personality. She is renowned for as the presenter of the children’s series Blue Peter.

For ten years, she also presented the BBC’s Radio Programme, 4 PM. Apart from this, she is also an actress.

She was born on the 9th of April 1937 in Hitchin, Hertfordshire. She is of British ethnicity.

Her father, Dennis Singleton was an ex-RAF wing commander. At the time of war, he suffered from pneumonia. Due to that, he was grounded. Later, he became an advertising manager for the J Walter Thompson advertising agency.

Her mother’s name was Eileen, a violinist. Valerie has a brother, Michael.

She graduated from the Frensham Height School in Farnham. Also, she attended Arts Educational School in Tring Park. Later, She joined the Royal Academy of Dramatic Art and studied dance for two years.

– Valerie Singleton started her career as a theatre actress with the New Theatre in Bromley. Later, in 1959, she appeared in the sitcom, The Adventures of Brigadier Wellington-Bull.

– In 1961, she joined the BBC as the host of the Blue Peter. From the show, she earned quite a reputation. During her time in the show, she even got the chance to accompany Princess Anna in Kenyan Royal Safari. She continued with the channel for about 10 years.

– Besides TV, she was also active in radio as a presenter. In 1964, she ended up being a radio presenter for BBC Radio’s program, On the Sunny Side of the Street for the Light Programme. One year later, she even worked as a reporter for the BBC Two’s Time Out.

– In 1978, she left the channel, Nationwide to present the BBC’s late-night news, Tonight. Later, she also hosted many radio programs including BBC Radio 4 PM.

Through her career as a presenter, she has managed to make a net worth of $1 million. Her earnings as a TV presenter are in the range of $31k – $120k

Apart from that, her earnings as a radio presenter are in the $59k or above. Also, she has contributed a significant amount of money in her net worth through her acting career.

There were rumors that she is a lesbian and had three years affair with the singer, Joan Armatrading. The rumors started when she took an interview with the singer for the BBC1’s program, Tonight in Town.

After that, rumors began that she ended up in bed with the singer. However, she had continuously denied this news. Also, she has mentioned that she is not a lesbian and had relationships with men.

Also, she admitted that last, she had been in the relationship with a builder who happens to be 24 years younger than her.

Valerie Singleton has hazel eyes with light hair. She has a height of 5 feet and 4 inches and has an average weight.

You may also read the bio, age, family, career, net worth, salary, and controversy of Jim White (presenter), Victoria Hervey, and Ricci Guarnaccio.