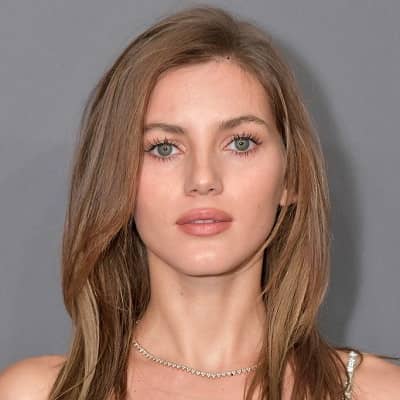 Valery has been dating American actor and musician, Jared Leto. He is about 23 years senior to her. They were first spotted together in June 2015 shopping for groceries in New York City and their dating rumors were spread.

The pair have never talked officially about their relationship. Their relationship seems to be on and off over the past few years. Lastly, they were seen hiking together in June 2020 although.

Likely, Valery was also in a relationship with Eli Mizrahi in 2016. He is an American socialite. They dated for a short period and get separated.

Who is Valery Kaufman?

Valery Kaufman is a Russian fashion model. She is well known for working with various advertising campaigns such as; ‘Alberta Ferretti,’ ‘Balmain,’ and so on. Also, the model has walked for ‘Victoria’s Secret Fashion Show’ in 2015 and 2016.

Valery was born on May 30, 1995, in Moscow Russia. Her birth name is Valeriya Kaufman. She holds Russian ethnicity and has English descent.

Her mother’s name is Marina Kaufman. And her father and sibling’s information is unknown. Valery was passionate about modeling from her childhood days.

She has even taken acting classes at the New York Film Academy. In an interview, she mentioned that she is planning to enroll at NYU next season for theater.

Valery started to appear on runways in 2011. She then worked for various times in ramping in Paris, Milan, and New York City fashion weeks. in 2013, she was part of Jill Stuart: Fall/Winter 2013-14 New York Fashion Week and Dolce & Gabbana: Fall/Winter 2014 Womenswear Collection.

Her model breakthrough was ramping for the ‘Victoria’s Secret Fashion Show’ in 2015 and 2016. Afterward, she got many opportunities from world-famous fashion brands, magazines, editorial, and so on.

Similarly, Valery has also worked for famous advertising campaigns like ‘Alberta Ferretti,’ ‘Balmain,’ ‘Boss Orange,’ ‘Saint Laurent,’ ‘Tommy Hilfiger, and many more. In 2015, the model appeared on the cover of ‘Russia Vogue.’

Likely, she appeared in editorials for ‘Allure,’ ‘CR Fashion Book,’ ‘Dazed & Confused,’ and so on. The model has then featured in other top magazines like ‘Flair,’ ‘D Magazine,’ ‘Interview,’ ‘Muse Magazine,’ and many more.

Kaufman has also attended various big and high-profile events. She has attended the amfAR Gala and Once Upon a Time in Hollywood premiere in Cannes May 2019.

The model has amassed a net worth of around $1 million. Victoria’s Secret Models are among the highest-paid models in the world. They earns average of $100,000-$1,000,000 annually. Likely, Valery also must have a good earning from her modeling career.

The model prefers not to be involved in any such activities causing any rumors and controversial news in the media.

Similarly, she has dark blonde hair with blue/green eyes. Her body measurement is 32-24-34 inches with a slim body build. The model wears a 6 (US) size dress and 7 (US) size shoes.