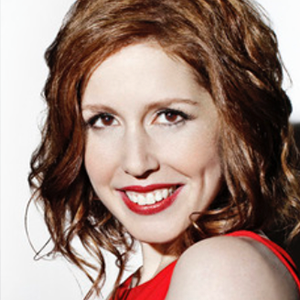 I sleep a lot on Sunday. It's really great

It's like, backstage at 'SNL,' like, if you come back after a show or something, or a lot of times even at the after-parties, we're just pretty tired and like, 'Hey, what's up.' Just getting a drink and kind of chilling out. Nothing crazy

It's totally my dream job. I grew up watching 'Saturday Night Live.' We'd watch it at sleepover parties and quote it.

Vanessa Bayer has not revealed much about her personal life. No proper information regarding her dating and relationship is provided.

Vanessa doesn’t seem to be married and having a husband. As she is not married, there are no chances of her to be pregnant. So, Currently, Vanessa Bayer is Single and focusing on his career and living happily

Who is Vanessa Bayer?

Vanessa Bayer is an American actress and comedian, best known as a cast member on Saturday Night Live and for supporting roles in films Trainwreck and Office Christmas Party.

Vanessa Polster Bayer famously only known as Vanessa Bayer was born on November 14, 1981, in Orange, Ohio, the U.S. she was raised in Orange, Ohio, a suburb of Cleveland, to a Reform Jewish family. Vanessa is the daughter of Carolyn (nee Polster) and Todd Bayer.

At the age of 15, Vanessa was diagnosed with leukemia. Bayer stated that while battling the disease, she discovered the meaning of “comic relief”. I don’t know if it made me funnier, but it was so amazing, how it made everything be O.K.”, she said.

Vanessa Bayer graduated from Orange High School in 2000 and attended the University of Pennsylvania, where she majored in communications and French, graduating in 2004.

While attending college, Vanessa interned on the television shows Sesame Street and Late Night with Conan O’Brien and Participated in the cast of Bloomers, an all-female musical and sketch comedy troupe. Vanessa was part of the all-Jewish cast of Second City’s stage show Jewsical: The Musical, a musical that presented take on Jewish life and culture.

Vanessa played the role of Kate Clark in the Chicago-based feature comedy Off the Cuff. She performed improvisational comedy at Chicago’s ImprovOlympic, where she trained with SNL castmate Paul BRitian as well as the Annoyance Theatre and Second City.

Vanessa was most recently lauded for her roles in the hit independent comedy film Carrie Pilby and the comedy Office Christmas party.

Saturday Night Live, Vanessa Bayer joined the cast of Saturday Night Live as a featured player on September 25, 2010. Beginning with the 2012-2013 season, Bayer was promoted to repertory status. She has been praised for her performance on the show, with HitFix calling her “one of the strongest members of the ensemble” and Rolling Stone calling her “Saturday Night Live’s secret weapon”. In 2014, she was nominated for an American Comedy Award for her work on the show. Following the departure of Nasim Pedrad after the 2013-14 season, Vanessa became the longest serving current female cast member.

Her recurring characters include:

Vanessa currently collaborates with her brother Jonah on the web series Sound Advice for the Above Average. Vanessa stars as Janessa Slater, a media coach who helps famous musicians change their image.

Vanessa Bayer’s Net worth is estimated to be $1 million dollars.

Vanessa has not been in rumors and controversies till date.

Talking about her physical appearance, she is a lady with beauty and brain. Along with the charming beauty, she has excellent, well-maintained hot and sexy body with wonderful body measurements.