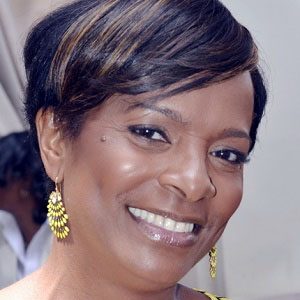 My motto is: look your best, feel your best, but most of all, be your best at any age.

Shameless is a show I would watch even if I wasn’t on it, it’s my kind of show.

Anytime anybody asks you to do anything that is celebrating you or highlighting your life, just the fact that they cared enough about me, who am I to say no? It's a form of flattery to me and I take those things seriously, because in the long run, people don't have to care about you.

Vanessa Bell Calloway is a married woman. She has been married to Dr. Anthony Calloway since September 3, 1988.

He is an anesthesiologist and the couple has welcomed two daughters: Ashley and Ally. Her daughter, Ashley is the actresses of the BET series ‘Baldwin Hills’.

She along with her husband hosts a Thanksgiving dinner for homeless people every year. She is also a member of Alpha Kappa Sorority, Incorporated.

Who is Vanessa Bell Calloway?

Vanessa Bell Calloway is an American actress and dancer who is best known for her role as Princess Imani Izzi in the 1988 comedy ‘Coming to America’.

She was born on March 20, 1957, in Toledo, Ohio, USA. She is currently 63 years old. Vanessa has a sister named Elaine Folayan. Her mother’s name is Beverly Bell but her father’s name is unknown.

Vanessa holds American citizenship but her ethnicity is unknown.

She achieved her Bachelor of Fine Arts from Ohio University and became a member of the African-America Alpha Kappa Alpha sorority.

Vanessa Bell Callowaybegan her career as a dancer in Michael Bennett’s Broadway production of Dreamgirls. She began acting from ‘All My Children’ in 1982. After that, she appeared in several shows like ‘Falcon Crest’, ‘1st & Ten’, ‘L.A. Law’, ‘A Different World’, etc.

She made her film debut from ‘Number One with a Bullet’ in 1987. After that, she appeared as Marci Hewitt in ‘Death Spa’ in 1989.  Also, she co-starred in CBS’s drama ‘Under One Roof’ in 1995 in which she portrayed the role of Maggie Langston.

In addition, she portrayed the recurring roles on ‘Boston Public’ and ‘The District’ and later starred in the films like ‘The Brothers’, ‘Biker Boyz’, ‘Cheaper by the Dozen’, and many more.

Recently, she appeared as Lila Burkholder in ‘Unbroken: Path to Redemption’ in 2018, Mrs. Jackson in ‘Thriller’ in 2019, and she has been portraying the role of Lady Ella Johnson in ‘Saints & Sinners’ since 2016.

She was nominated for Image Award in the category Outstanding Supporting Actress in a Drama Seris for ‘Hawthrone’, ‘The District’, and ‘Boston Public’ in 2011, 2004, and 2002 respectively.

Also, she was nominated several times in her career.

She was diagnosed with Ductal carcinoma in situ (DCIS) at the age of 52, and the result showed that the presence of abnormal cells inside a milk duct in her right breast.

After that, she went for reconstructive surgery which went successfully. She told her breast cancer survivor journey to ‘theGrio’.

She has an estimated net worth of around $600,000 and she has earned that sum of money from her professional career.

Vanessa has been successful in maintaining her celebrity status and she has not been involved in any type of rumors and controversies in her career.

Vanessa Bell Calloway has a height of 5 ft. 5 inches and weighs 59 kg. Vanessa has black eyes and dark brown hair. But, information regarding her body measurement, shoe size, dress size, etc. are not available.

To know more about Leigh-Allyn Baker, Talia Balsam, and Catherine Bach, please click on the link.