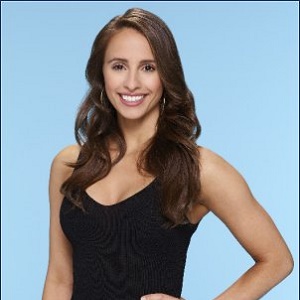 What is the relationship of Vanessa Grimaldi?

We know from “Reality Steve” that Nick gave the first impression rose to Rachel Lindsay, As it turns out. She is the first African-American contestant on the show to get that honor and still be part of the Final Four.

When the Final Four contestants of “The Bachelor” and, facing Nick in a Rose Ceremony were Rachel Lindsay, Raven Gates, Corinne Olympios and,“Vanessa Grimaldi”. Steve tells us that Corinne was sent home as the others prepared for Overnight Dates with Nick Vaill.

The foursome went to Finland. Once the overnight dates were completed, the nest “Rose Ceremony” was held. This is when Nick sent home and kept “Vanessa” and Raven for his Final two.

The final day of taping was November 18th. Nick Vaill did indeed drop to one knee and asked one of the ladies to be his bride. Venessa said yes, the two are now “Officially Engaged”.

Vanessa is planning to a make beautiful family with Nick Vaill. The beautiful couple is currently happy together.

Who is Vanessa Grimaldi?

Vanessa Grimaldi is a Canadian Special education teacher and reality star. She competed and won the final rose on Season 21 of ABC’s “The Bachelor”. She also has some experience as an Actress.

Vanessa Grimaldi was born on September 29, 1987, in Montreal, Quebec, Canada. She comes from an Italian ethnicity and has Canadian nationality.

Her parents Mary(mother) and Pat(father) are divorced. She has two siblings, Melissa and Patrick. Her mother is an Italian teacher. Her grandfather passed away shortly prior to filming. She speaks English, French and Italian. She does have phobias of sharks and Bees.

She comes from an Italian family and often has posted photos of them to her Instagram account.

Vanessa Grimaldi works as a special education teacher. She rose to prominence as a frontrunner on season 21 of “The Bachelor”. The show premiered on January 2, 2017, and included a total of 30 women. Other top contenders for the final rose included attorney ‘Rachel Lindsay’, fashion boutique owner ‘Raven Gates’ and business owner ‘Corinne Olympics’.

In addition to teaching, Grimaldi has dabbled in acting as well. She made her Television debut in a 2010 episode of the comedy series, Blue Mountain State. Vanessa co-hosted two episodes of the mini-series “Can Your School Rock” (2010). She was cast as “Lola” in Being Human (2011) and as the “New Stewardess” in Ascension (2014). She’s also hosted YouTube videos for French video game developer Gameloft.

Vanessa Grimaldi: Salary and Net Worth

There was a rumor that Nick and Vanessa got pregnant during “The Bachelor”. Later it was confirmed that it was just a rumor and nothing more than that.

Inside the Postpartum Looks of Bachelor alum Vanessa Grimaldi After Baby with Husband Joshua Wolfe!

Where Is The Couple Nick Viall and Vanessa Grimaldi Split? Are They Still Dating Or Have Split-Up? Let’s Find Out About Their Relationship