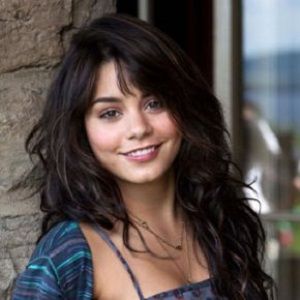 I think I'd make a pretty good girlfriend

If people don't like me for whatever I do, for being me, then that's too bad. I don't want to change to be something that I'm not for other people to like me

The second I met Zac, I thought he was a really cool guy. It's hard not to have chemistry with someone who is so attractive.

What is the relationship of Vanessa Hudgens?

Vanessa Hudgens was in a relationship with Zac Efron who was her co-star in High School Musical. Their relationship started in 2005. Vanessa and Zac shared a very romantic relationship and were frequently targeted by the media.

BBC also predicted her as a Household name in the US. Unfortunately, after five years, they ended their relationship. In 2011, Vanessa was again in a relationship with an American actor Austin Butler.

The couples are spotted together much time at various parties and events. Being in a long-term relationship, Vanessa seems to be happy with Austin and there is no chance of separation at the moment.

Who is Vanessa Hudgens?

Vanessa Hudgens is an American actress and singer. She has played in various films and series. Vanessa Hudgens has been in huge success for her role in the High School Musical series.

Which helped her to make a household name. She is also famous for her movies including Bandslam, Beastly, Sucker Punch, Journey 2: The Mysterious Island, Spring Breakers, and Machete Kills.

Vanessa Hudgens was born on December 14, 1988, in Salinas, California, USA. Her nationality is American and her ethnicity is Irish-Filipino.

Her mother Gina was a job holder and her father Gregory Hudgens was a firefighter. Her sister Stella Hudgens is also an actress. Her father is Irish and her mother is Filipino.

Vanessa belongs to a family of musicians as her grandparents were great musicians. Vanessa was grown up in a Roman Catholic family.

Vanessa attended Orange County High School of the Arts. She had been homeschooled from grade eleven and had passed his graduation.

She was interested in studying business when she went to college and her hobby is photography.

Vanessa started singing at the age of eight in local plays like Carousel, That Wizard of Oz, The Music Man, The King, and I and Cinderella.

After gaining enough experience, she had her TV debut on the CBS sitcom “Still Standing” as a guest appearance. She made her film debut in 2003 in “Thirteen” and later on “Thunderbirds”.

In 2005, she got the role in the movie High School Musical by Disney Channel which made her very famous. Vanessa released her debut album “V” with Hollywood Records in 2006.

Next year the sequel of High School Musical was released and it was a huge success and won the Nickelodeon Australian Kid’s Choice Awards in the So Hot Right Now category.

Later Vanessa left Hollywood Records after the failure of her second album “Identified” and took a break from her singing career.

Her movie “Bandslam” was very praised by critics but it received mediocre ratings. She also learned to play guitar for the movie character.

In 2011, her movie Beastly and Sucker Punch was released but it couldn’t grab lots of positive acclaims. Vanessa also worked with Dwayne Johnson and Josh Hutcherson in the movie “Journey 2: The Mysterious Island”.

In 2013, she acted in movies including “The Frozen Ground”, “’Machete Kills” and “Gimme Shelter”. Hudgens took on the title role in the new production Gigi later she transferred to Broadway.

Hudgens was cast in a pilot for a TV comedy series titled Powerless based on DC Comics characters. Vanessa also won the Teen Choice Awards in the ‘Choice Music: Breakout Artist – Female’ category in 2006 and the ShoWest ”Female Star Of Tomorrow” Award in 2010.

Vanessa Hudgens: Salary and Net Worth

As per the sources, her total net worth is $16 million as of 2022, but her salary is not revealed yet.

In 2007, Brian Schall sued her for an alleged ‘breach of contract’. He claimed Vanessa owes her $150,000. She retorted by saying that at the time of signing the contract (i.e. October 2005) she was still a minor and couldn’t possibly do so.

In the same year, many pictures of Vanessa were released on the internet which led her to a huge controversy.

In many of the photos she was posing in Lingerie and in a few of them she was even seen naked. The same sequence was repeated in 2009 with her naked photos on the internet.

In 2016 Vanessa paid $1,000 in restitution for damage to U.S. Forest Service property by carving the initials of her and Butler’s names within a heart on a rock in the Coconino National Forest and displaying it on her personal Instagram feed.

Vanessa Hudgens has a height of 5 feet 1 inch. Her body weighs 50kg.

She has black hair and dark brown eyes. Furthermore, her body measurements are 33-24-34 inches.

Do not miss to find out more about the birth facts, salary, net worth, relationship, controversy, and the bio of Joe Wilkinson, Dennis Miller, and Keith Ellison.