Posted by MarriedBiography Posted on November 24, 2020 | In Dating , Net Worth , Relationship
Share this 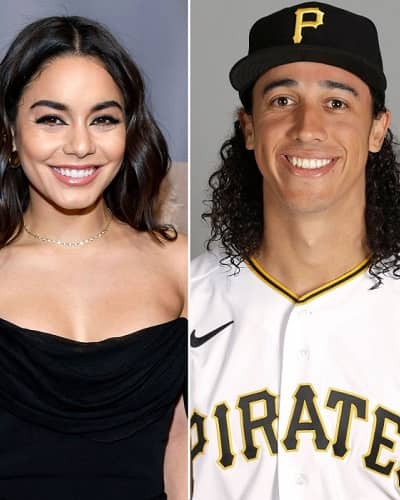 The Princess Switch actress Vanessa Hudgens has a new boo. She was holding hands with her new beau Cole Tucker on 21st November 2020 in Los Angeles.

Similarly, she teased in an Instagram post saying that she might no longer be on the market. She shared the snapshot of herself dressed up and holding a pink rose to her face.

Even though she posted of her alone but she was spotted with MLB athlete Cole Tucker.

They were photographed holding hands and hugging one another after an outing at Canyon Country Store in Los Angeles. They were waiting at the valet outside the establishment.

Also read Larsa Pippen claims that she was dating Tristan Thompson just 10 days before he switched to Khloe Kardashian!

Vanessa Hudgens and Austin Butler met each other in the year 2005 on the set of High School Musical. They remained friends for years. In September 2011, they indicated that they are dating when Austin was seen leaving her home in Los Angeles. Again in January 2012, they were spotted on a double date with Danielle Panabaker and her boyfriend.

In April 2012, they became Coachella officials. In August 2012, they were seen at Outside Lands in San Francisco. As per sources,

“She seemed to be having the time of her life. You could tell that she’s really into music and felt good having her boyfriend by her side. She would make cute little faces at him, and he would just stare at her, looking totally in love.”

After years of dating, she made their relationship on an Instagram official in December 2013. In December 2017, there were rumors that the two have got engaged.

Sadly after almost 8 years of relationship, they broke up in January 2020. Their relationship became difficult after they started doing it long distance. She said,

“It’s eight years this year–FaceTime, good communication, respect and trust [are what keep us going]. The longest we’ve been apart was four months. It sucks! You start hating hearing yourself say ‘I miss you.’ But if it’s your person, you make it work.”

How much is the net worth of Vanessa Hudgens?

His TV series work The Disney Family Singalong, Rent: Live, Drunk History, So You Think You Can Dance, Drop the Mic, Running Wild with Bear Grylls, Powerless, Grease: Live, and more. In the year 2008, she bought a  property in Studio City, California for $2.75 million. In February 2019, she listed her house for sale for $3.85 million but sold it for $3.15 million.

Likewise, in 2018, Vanessa paid $5 million for her LA house. She also has a $1 million condo in Brooklyn.

Vanessa Hudgens is an American actress and singer. She has played in various films and series. She has been in huge success for her role in the High School Musical series. Which helped her to make a household name. She is also famous for her movies including Bandslam, Beastly, Sucker Punch, Journey 2: The Mysterious Island, Spring Breakers, and Machete Kills. Read more bio…