(Actress and a singer)

Vanessa Marano is without a doubt, a young talented, and elegant actress. Her beauty has attracted the interest of millions of male followers. She must have hundreds of admirers in the industry.

As per some reports, she is single now.

Talking about her previous relationships, she has dated Ross Lynch, who is a singer-songwriter. But soon they ended their relationship affair.

Later there were rumors of her and Jason Mraz’s affair. The rumors started when they were working on their music video. They both did not confirm their relationship. 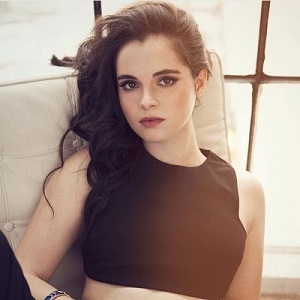 I'm very into dark colors. I try to rock the dark against the ghost white skin as much as humanly possible.

I've been on plenty of sets where I have not liked the people that I work with, but you suck it up and be professional.

Who is Vanessa Marano?

Vanessa Marano is a well-known actress and singer. The talented and gorgeous actress has starred in multiple films and TV series like “Without a Trace”, “The Comeback”, “The Young and the Restless”, “Scoundrels”, “The Clique”, “Senior Project” and so on.

Presently, Vanessa Marano is reprising her role of Bay Kennish in an American teen/family drama television series, “Switched at Birth”. She is portraying this role from 2011 to the present.

Vanessa was born on October 31, 1992, in the city of Angels, Los Angeles, in the state of California. Her ethnicity is a mixture of Italian, English, and Irish descent, and nationality is American.

She was born to the father, Damiano Marano is of Italian descent. Her father is a college professor. Her mother’s name is Ellen Marano who is the owner of Agoura Children’s Theater; she is of English and Irish descent.

She has a sister and her name is Laura Marano, who is also an actress. Early in her childhood, she started her professional acting career.

As per her education or academic achievement, she went to community college.

Vanessa Marano initiated her professional acting career from a very young age. When she was 7 years old, she started working for productions at the Stage Door Theater.

In 2002, she landed her first major role on TV. She joined the cast of an American police procedural television drama series, “Without a Trace”. Vanessa portrayed the role of Hannah Malone in it. She worked hard. Consequently, she went on to play different TV series like “The Comeback”, “The Young and the Restless”, “Scoundrels”, “Switched at Birth” and so on.

On the other hand, she was doing movies too. She appeared on a film, “Easy” where she played an uncredited role of Little Jamie. The same year she also provided an additional voice in the movie, “Finding Nemo”. She earned the nomination for her astounding performance in “Switched at Birth” in 2011 and 2013.

Vanessa Marano:  Salary and Net Worth

Vanessa was involved in several rumors in the past. In the past, when she was working with singer Jason Mraz on some music, their dating rumors spread pretty fast. But there is no concrete proof to support it.

She tries to avoid any media controversies and maintains her professional and personal life without any media tittle-tattle.

She has dark brown hair and dark brown eyes. Furthermore, her dress size is 4US, shoe size is 7US and her bra size is 32B.