She is also a member of both the American Meteorological Society (AMS) and the National Weather Association (NWA).

She currently resides in North Bergen, NJ with her husband, daughters and their dog Zeus. 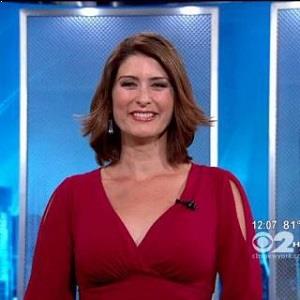 Who is Vanessa Murdock?

Vanessa Murdock is an American Certified Broadcast Meteorologist. In addition, she is also a member of both the American Meteorological Society (AMS) and the National Weather Association (NWA).

Furthermore, she joined the CBS 2 Weather Team in October 2011 as the weekend morning meteorologist and weekday reporter.

Vanessa was born on Long Island. She spent most of her early years and childhood in the small town of Center Moriches on a street named after her great-grandparents.

Information relating to her ethnic background and the parental background is not available at present. She is of American nationality.

Talking about her education, Vanessa earned her Master’s degree in Meteorology from Penn State University.

Initially, after graduating from PSU, Vanessa traveled to Central Virginia where she began her career as a Broadcast Meteorologist at WCAV/WVAW/WAHU.

Next, she worked for two years as the evening weather anchor for both the local ABC and FOX affiliates in Charlottesville. Later, she arrived at Norfolk, VA.

There, she spent nearly five years forecasting for communities up and down the Mid-Atlantic coastline.

Vanessa’s one of the important works was in reporting on Hurricane Irene. Currently, she is working for CBS 2 Weather Team as a broadcast meteorologist.

Additionally, she is also an adjunct instructor of meteorology at Virginia Wesleyan College. Furthermore, she has also been nominated for the Emmy Awards for her work in Television.

Currently, there is no information regarding the salary and net worth of Venessa.

Vanessa has kept her life and career away from the mainstream spotlight. Hence, there are no rumors concerning her at present.

Furthermore, she has not been involved in any notable controversies as of now.

Danielle Niles Married to the most Loving Husband Matt Noyes; Is she Pregnant?