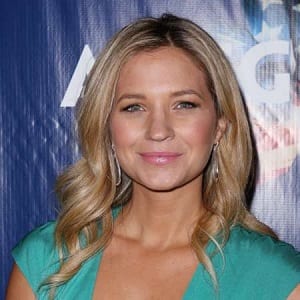 Whatever age you think I am, you're probably right.

I've worked with a couple of these really cool, great actors like Ted Danson and Glenn Close. They all have their own presence when they walk into a room, and I was excited to see what Tom Selleck's 'space' was going to be like.

I visualized high school as being like 'Saved By the Bell.' I decided I would do all the things they did on that show.

Vanessa Ray is married to actor Landon Beard. They previously dated for six years and announced their engagement in March 2015. The couple later married on 14 June 2015.

Previously, he was married to actor Derek James Baynham. The pair’s marriage was covered in the reality show ‘Marriage Under Construction’. They were together from 23 March 2003 to 2009.

Who is Vanessa Ray?

Vanessa Ray is an American actress and singer. People mostly recognize her for her role as CeCe Drake in the American television series ‘Pretty Little Liars’.

Additionally, she also appeared as Jenny on the legal drama series ‘Suits’ and as Teri Ciccone on ‘As the World Turns’.

Ray was born in Livermore, California on June 24, 1981. She was born Vanessa Rae Liptak to parents Valerie Liptak and James Liptak. Ray became interested in the world of acting and since her childhood years. She is of American nationality. Furthermore, she belongs to a mixed ethnic background of English, Hungarian, and Slovak.

Talking about her education, there is no detailed information relating to Ray’s educational background.

Ray initially appeared in the short video ‘The Sparky Chronicles: The Map’ as Chris in 2003. Additionally, in 2004, she also appeared as Steph in ‘Is He…’

Later, she portrayed the role of Katrina in the movie ‘Finding Chance’ in 2008. She also appeared as Claudia in the TV series ‘Bored to Death’ in 2009.

Since then, she has appeared in numerous other movies and television series. All in all, she has over 25 credits as an actress.

Some other movies and television series that Ray has appeared in are ‘Blue Bloods’, ‘Best-Selling Murder’, ‘The Rumperbutts’, ‘All in Time’, ‘My Day’, ‘Are You Joking?’, ‘Devil’s Due’, ‘Wisdom Teeth’, ‘Mutual Friends’, ‘The Mentalist’, ‘The Right Not to Know’, ‘The Last Day of August’, ‘Pretty Dirty Secrets’, ‘Frances Ha’, ‘Not Waving But Drowning’, ‘Girls’, and ‘Nice Guy Johnny’ among others.

Ray has not revealed her current salary. However, she has an estimated net worth of around $ 3 million at present.

Ray became part of a controversy after the ‘Pretty Little Liars’ show’s controversial transgender reveals in 2015. At present, there are no rumors concerning her life and career.