Vanessa Simmons is an Actress, Creative director, CEO of sugarmelife, Glitter & Lace. Vanessa is dating an actor and a mother of one. 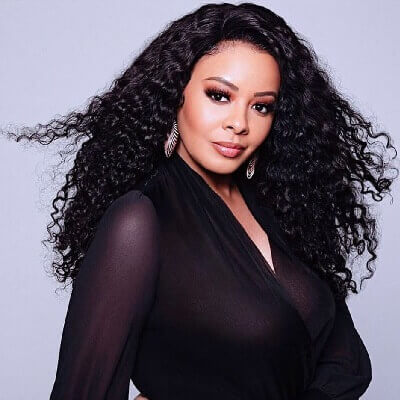 It's a slow process, definitely. We're so super blessed and thankful, but we're just trying to grow and help where we can. Because we think that what you put into the universe you get back, and it's important that people understand that.

I'm working on my Teach for America application!!!! Yall wish me luck, k???

Vanessa Simmons is in a long-term relationship. She is dating Michael Wayans. The couple has been dating since 2005 but has not been engaged so far.

Michael is known for his work on Blankman, Dance Flick, and My Wife and Kids. Vanessa gave birth to their first child, a beautiful daughter named Ava Marie Jean Wayans on February 13, 2014. The baby shower was done at the Sugar Factory in Hollywood and the ceremony was attended by celebrities like Tyrese Gibson and Joseph Simmons.

The couple has not revealed why they haven’t got married but Simmons has admitted that they might get engaged soon. After getting married, they have planned to have more babies together.

Who is Vanessa Simmons?

Vanessa Simmons is an American reality TV personality. She is best known for her appearances in ‘Run’s House’ and ‘Project Runway: Threads’.

Her father, better known by his stage names, Run, Rev. Run, or DJ Run, is a musician and a  founding member of the hip hop group Run–D.M.C She has two younger siblings, Angela Simmons, and Joseph “Jojo” Simmons Jr.

Her parents divorced when she was young and from his marriage with Justine Jones, she has four half-siblings, Daniel “Diggy” Simmons III, Russell “Russy” Simmons II, Miley Justine Simmons, and Victoria Anne Simmons.

Talking about her education, she went to St. John’s University.

Vanessa Simmons has an estimated net worth of around $8 million. Her primary sources of income include her appearances on TV and her shoe brand, Pastry. There is no information about her salary. An average reality TV star earns around $45k a year.

Her father, Joseph Simmons has an estimated net worth of around $70 million.

Vanessa Simmons entered the entertainment industry in 2005 with ‘Run’s House’, an MTV Reality show. The series is about the family life of her dad and hip hop legend, Joseph Simmons. The show debuted on October 13, 2005. It has six seasons and 59 episodes in total.

In 2008, she participated in Miss California USA without telling her parents. She has also appeared in Boogie Town and the movie, Dysfunctional Friends. Moreover, she also had a role in the soap opera TV show, Guiding Light followed by a role in the movie, Speed Dating. In 2014, she starred in the web series, Mixed. The same year, she became the judge and host of Project Runway: Threads.

Simmons stands at a height of around 5 feet 6 inches. Her weight is 57 kg. Her hourglass figure is attractive and has body measurements of 34-25-36 for breasts, waist, and hips. She has a pair of dark brown eyes and her hair is black in color.

Vanessa has not been involved in any controversies. She has been able to keep herself far away from any kind of scandal and controversy. So far, she has not done anything controversial in her career. Similarly, there are no rumors about her, either.

You may also like to read the Bio, Career, Body Measurements, Social Media, Net Worth, Relationships, and more about Damon Wayans, Joseph Simmons, Angela Simmons, and more.