Vanna White is an American actress and host. She hosted a game show, Wheel of Fortune. Vanna was previously married and has two children. 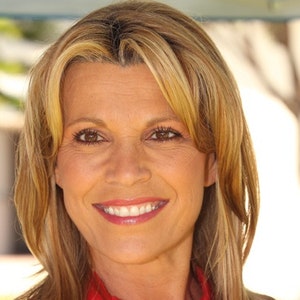 "The day I can't fit into dresses and can't walk and can't see is the day I'll stop. But that's not approaching yet.”

“It's not the most intellectual job in the world, but I do have to know the letters.”

“When I was having that alphabet soup, I never thought that it would pay off.”

“I think people think of me as this elegant person because they always see me dressed up.”

Unfortunately, they divorced in 2002 despite having a perfect family. After her divorce, she dated finance mogul Michael Kaye and engaged him. However, they never married, and it seems that the marriage was called off due to undisclosed reasons.

Moreover, she was inflicted with tragedy when her mother died in 1980 due to ovarian cancer. She was just recovering from the emotional distress it brought, her longtime lover, John Gibson, a soap opera actor, and Chippendale dancer took his last breath after meeting with an unfortunate private plane crash in 1986.

Who is Vanna White?

Vanna White is a television personality and film actress who hails from America.

Vanna White earned a lot of attention and recognition for her appearances as the hostess of Wheel of Fortune since 1982.

She was born as Vanna Marie Angel on February 18, 1957, in North Myrtle Beach, South Carolina, the U.S. As of 2021, she is 64 years old. Her mother is Joan Marie Rosich and her father is Miguel Angel.

She is of Puerto Rican ethnic background.

However, due to some undisclosed reasons, her father left her and divorced his wife. Luckily, her stepfather, Herbert Stackley White Jr. took the role of a fatherly figure to provide her much-needed care and attention every child needs.

She moved to Myrtle Beach, South Carolina following the success of her stepfather as an estate broker/owner of White’s Realty.

Despite her fame, not much focus is given to her childhood and early life. Thus, we can only wait until she uncovers how she spent her early life.

Discussing her education, she moved to Atlanta, Georgia to enroll in Fashion after she graduated from high school.

White moved to Los Angeles in 1979 to pursue a career in acting. Eventually, she landed her debut role as Mickey in a rather flop movie called Gypsy Angels (1980). In the next year, she landed minor roles in movies like Looker and Graduation Day.

Incredibly, she grabbed her career lifting role as the hostess and puzzle-board turner of the NBC game show, Wheel of Fortune.

Her talents and aptitude among the other 200 applicants were more appealing and noteworthy. The people who selected her couldn’t be happier as the show took off to new heights tremendously over the next several years. The rise was meteoric as it attracted 30 million viewers and grossed a whopping $100 million a year.

The attention and fame the show brought to her attracted lucrative endorsement contracts and appearances in the NBC movie named Venus: The Goddess of Love. Moreover, she became an iconic figure in American pop culture due to her beauty, energy, and constant charisma.

As a result of a successful career, she won Star on the Walk of Fame in 2006.

Moreover, she has accumulated a lot of income from the show and other lucrative deals and endorsements. As of now, she is worth a staggering $70 Million and a whopping $10 Million as a yearly salary.

On 11 February 2015, an article in Empire News surfaced the controversy revealing that she was fired from the TV game show Wheel of Fortune.

The article mentioned her compulsive roulette-playing habit as the main reason. Bob Cisneros, the director of the show, said, “However, her recent actions have compromised the production of this all-American favorite.

The betrayal felt by viewers upon seeing her spinning around with other wheels is too great to be tolerated.

It’s as if she is a wife who cheated on her husband, and her husband is the Wheel of Fortune viewer. She is no longer the loyal servant we once knew and loved.”

However, no further comments were given regarding the rumors which could have upset a lot of her lovers and fans. The only thing they did was prove that she was still part of the show.

She stands at an average height of 67.2 inches and weighs just 52 kg. Precisely, her exact body figure is 35-23.5-35 inches which gives her an hourglass figure. She looks gorgeous with her brown eyes and blonde hair.