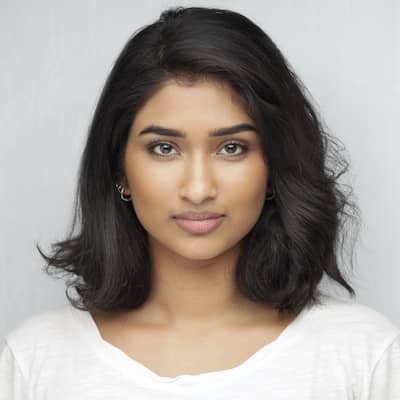 What is the relationship of Varada Sethu?

Varada Sethu at present is possibly a single woman. She has not shared the details regarding her affair or boyfriend yet.

Who is Varada Sethu?

Varada Sethu is an actress and model of British nationality. Varada Sethu is popular for her appearance in Now You See Me 2 (2016), Jurassic World Dominion (2022), Strike Back (2010), etc.

Her future movie I Came By is in the post-production stage. In 2010, she stepped into the acting Industry with Impressions (Short) as Sameena.

Her birthdate is 12 May 1992 and she was born in Kerela, India. The name of her mother and her father name is unknown.

Further, her ancestry is Indian and has a twin sister named Abhaya.

As to her academics, she first passed out from Dame Allan’s Schools. Then she went to study Veterinary medicine at the University of Bristol. However, she changed the faculty to Physiology.

Moreover, she completed her acting education at the Identity School of Acting.

Varada Sethu 2005 has appeared in many screen projects. Recently, she was seen in the movie Jurassic World Dominion playing the role of Shira in 2022.

Varada’s other film projects where she was seen in major characters are,

By the reports of 2022, Varada Sethu has an estimated net worth of $1 million which she collected from her work.

The cast of Now You See Me 2 is keeping herself away from scandals along with desperate rumors.

Varada Sethu’s height is 5 ft 4.5 inches and her body weight is average. Furthermore, she has black hair and her beautiful eyes are dark brown.