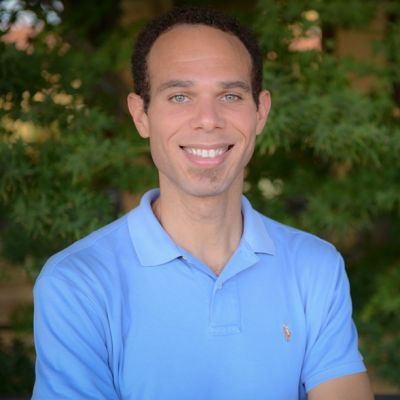 Is Vaughn Rasberry happily Living with his Wife and Kids?

Vaughn and Tatyana are proud parents to their two sons. They welcomed their first son, Edward Aszard Rasberry on December 16, 2016.

Following that, they again welcomed their second son, Alejandro Vaughn Rasberry, on August 15, 2019.

Who is Vaughn Rasberry?

Vaughn Rasberry is an American associate professor and author. He is also a Celebrity husband, who is best known for being the husband of popular actress and singer, Tatyana Ali.

The celebrity spouse, Vaughn was born on 16 August 1978, in California, the USA. As of 2022, he is 44 years old holding an American nationality.

Similarly, his ethnicity is Afro-American while his birth sign is Leo.

The professor has not shared the details of his family background, including his parents and siblings.

As per his academics, he completed his graduation from Howard University with a bachelor’s degree in English language and literature. Following that, he earned his M.A. degree in Humanities from the University of Chicago.

Moving on to his professional life, he worked as a teacher of American Studies and African literature at the Humboldt University of Berlin, Germany from 2008 to 2009. Being a dedicated teacher, in 2008 he earned the 2008 Guest Lecturer Award from Tokyo International University.

He has also served as an assistant professor of English at Stanford University at the Center for Comparative Studies in Race and Ethnicity (CCSRE).

As an article writer, In 2014,  he has written the article titled, “Invoking Totalitarianism: Liberal Democracy Versus The Global Jihad In Boualem Sansal’s The German Mujahid” for the 2014 issue of “Novel: A Forum On Fiction”.

His book chapters entitled, “JFK And The Global Anticolonial Movement” – was published in “The Cambridge Companion To John F. Kennedy”, and “The ‘Lost’ Years Or A ‘Decade Of Progress’? African American Writers And The Second World War” was published in 2015.

In 2016, he published his self-written book, Race And The Totalitarian Century: Geopolitics In The Black Literary Imagination.

The book gained critical acclamation, which earned him two Awards; the American Political Science Association and the Before Columbus Foundation American Book Awards.

The versatile lecturer, Rasberry’s net worth is estimated to be more than $6 million as of August 2022.

His main sources of earning are as an academic and author of various articles, essays, book chapters, and the sales of his book, “Race and the Totalitarian Century”.

The husband of ‘The Fresh Prince of Bel-Air‘s actress is keeping himself away from unnecessary rumors and controversies.

Moreover, he has dark brown hair along with a sharp blue color set of eyes.

Few Unknown Facts You Did Not Know About Professor Dr. Vaughn Rasberry And His Married Life With Tatyana Ali!