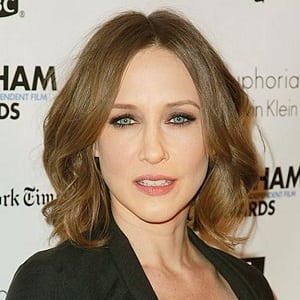 t's terrifying to be the lead. There's a moment of excitement, and then pure terror.

There are some times when I think acting can be a noble profession.

I just can't feel lukewarm about a character. I either despise her, admire her, or don't understand her and want to understand her.

Doubt is the middle position between knowledge and ignorance. It encompasses cynicism but also genuine questioning.

What is the relationship of Vera Farmiga?

Vera Farmiga was previously married to the French actor Sebastian Roche. They were in a relationship for a year and later married in 1997. They divorced in 2004.

Farmiga is currently a married woman. She is married to American musician Renn Hawkey. After dating for four years the pair married on 13 September 2008.

They have two children, Fynn and Gytta Lubov. The marriage is going strong as there is no news regarding any extramarital affairs at present.

Who is Vera Farmiga?

Vera Farmiga is an American actress, director, and producer. She has appeared in films including ‘Higher Ground’, ‘Nothing But the Truth, ‘Down to the Bone, and ‘Up in the Air among others.

Additionally, she starred as Lorraine Warren in the horror film ‘The Conjuring’.

Farmiga was born as Vera Ann Farmiga in Clifton, New Jersey on August 6, 1973. Currently, she is 49 years old. She was born to parents Michael Farmiga and Lubomyra.

Her mother was a schoolteacher and her father was a systems analyst-turned-landscaper. Additionally, she has one older brother, Victor, and five younger siblings Alexander, Laryssa, Taissa, Stephan, and Nadia.

She is of American and Ukrainian nationality. Furthermore, she belongs to the Ukrainian ethnic background.

Vera Farmiga initially made her debut with a small role in the 1997 TV movie, ‘Rose Hill’. Additionally, she played the role of Catlin in ‘Roar’. She also starred in the TV movie ‘Law & Order’ in 1998. Later in the same year, she was cast in ‘Return to Paradise. In addition, in 2000, Farmiga had a role in ‘The Opportunists’.

In 2001, Vera also starred in ‘15 Minutes’ as Daphne Handlova. Since then, she has appeared in numerous other movies and television series. All in all, she has over 50 credits as an actress.

Some other movies and television series that Farmiga has appeared in are ‘Skin’, ‘The Front Runner’, ‘Boundaries’, ‘Electric Dreams’, ‘Bates Motel’, ‘Burn Your Maps’, ‘Special Correspondents’, ‘Closer to the Moon, ‘Safe House’, ‘Higher Ground’, ‘Up in the Air’, ‘The Boy in the Striped Pajamas’, ‘Never Forever, ‘The Manchurian Candidate, ‘Iron Jawed Angels’, ‘Love in the Time of Money, and ‘The Opportunists’ among others.

Furthermore, she has also garnered the BAFTA Film Award and Saturn Award nominations. All in all, she has 18 wins and 77 nominations to her name to date.

Farmiga has not revealed her current salary. However, she has an estimated net worth of around $10 million as of 2022.

Although Farmiga has not been part of any notable controversies herself, the show that she is part of ‘Bates Motel’ has attracted numerous controversies over the years.

At present, there are no rumors concerning Farmiga and her career.

Talking about her body measurement, Vera Farmiga has a height of 5 feet 7 inches (1.7 m). Additionally, she weighs around 132 lbs or 60 kg.

In addition, she has over 1 million followers on Instagram. Similarly, her Facebook page has more than 620k followers.