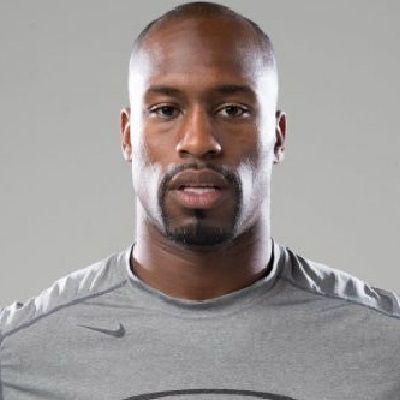 What is the relationship of Vernon Davis?

Vernon Davis is not married but has been in a relationship with Janel Horne, his fiancee for over 15 years. They also have three children.
Their son’s name is Jianni Davis and their daughter’s name is Valleigh Davis. But in 2016, she accused Vernon of cheating.
At present, he is in a relationship with Kayla Sortor. He has proposed to her in 2018 and now they are engaged.

Who is Vernon Davis?

Vernon Davis is an American football tight end who plays for the Washington Redskins in the National Football League (NFL). In the 2006 draft, he was sixth overall by the San Francisco 49ers before which he played college football at Maryland.

He was the highest-paid tight end after signing a five-year deal worth US$23 million. He co-led the NFL in touchdown receptions in 2009.

He will judge the 2022 FOX Domino Masters.

Vernon Davis was born on January 31, 1984, in Washington DC. His father’s name is Duke Davis, and likely, his mother’s name is Jacqueline Davis.

However, after his parents’ marriage succumbed to challenges when he was young, he was raised alongside his six siblings by his grandmother Adeline Davis.

His father was never around for them and his mother was a drug addict. Davis had a troubled childhood and it is believed that the issues he had were why he had a hard time empathizing with other players on the pitch during the early days of his career.

His grandmother Adeline helped him overcome fear and anxiety with her words of encouragement.

The most popular among Vernon’s siblings is his brother, Vontae Davis. Like Vernon, Vontae plays football professionally for the Buffalo Bills.

He attended Dunbar High School in Washington and his glory days started there as he excelled in different kinds of sports.

Then Vernon enrolled in the University of Maryland, where he majored in studio art and played for the Maryland Terrapins football team.

While at Dunbar, he tested all wings in the school’s team playing as a wide receiver, linebacker, as well as a tight end, and safety.

He finished his junior season with 35 receptions for 385 yards and improved his game as a senior, gathering five touchdowns which came with 21 caught passes for 511 yards.

Moving to college, he joined the Maryland Terrapins of the University of Maryland. From his freshman year, Vernon started to break records and show great skillfulness. He was a starter at most games and led the school team to numerous match victories from 2003 to 2005.

Almost as predicted, Davis was selected by the San Francisco 49ers as the sixth overall pick in the first round of the 2006 NFL Draft.

He was one of the top tight ends in the 2006 Draft following his tenacity at the scouting combine. In his rookie year with the team, Davis ran 265 yards on 20 catches and had three receiving touchdowns.

He got even better in the subsequent seasons but left the San Francisco 49ers after the 2014 campaign and joined the Denver Broncos in November 2015.

As it happened, Vernon was traded alongside a 2016 seventh-round pick to the team where he clinched his first super bowl championship following the Broncos’ victory in super bowl 50.

He left the Broncos in 2016 and moved on to the Washington Redskin that same year, on a one-year contract. His contract with the team was up to three years in March 2017.

Despite being a talented player, he hasn’t received any awards.

Vernon Davis sits on a net worth estimated at $16 million. Per calculations, Davis made up to $69 million as his overall earnings over 12 seasons.

In 2010, he received a five-year $37 million contract extension from the 49ers, becoming the highest-paid tight end in the NFL at the time. In 2017 alone, the tight end made $3 million which was ranked among the highest in NFL.

He is far from being into any kind of rumors.

Vernon Davis has got the right body to go with his daunting career.

Get to know the bio, career, net worth, awards, body measurement, and social media of various other personalities like Matthew Felker, Mahershala Ali, Barry Jenkins, and Patsy Palmer.