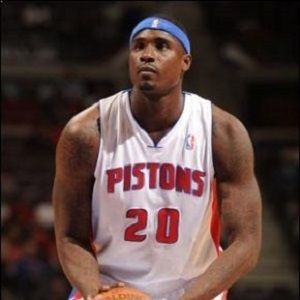 Is Vernon Macklin dating anyone?

Reflecting on a personal life of Vernon Macklin, he was in a relationship with model Brooke Bailey.

But there isn’t further information about their relationship. There isn’t any solid proof which leads towards his married life and children.

Talking about a present relationship of Macklin, he is possibly single.

There isn’t any information about him being in a romantic relationship except Brooke Bailey.

Being a celebrity, his personal stuff is always a matter of discussion and interest to the public.

Who is Vernon Macklin?

He is best known as the player from Al Jaysh of the Qatari Basketball League wearing jersey number 22. He often plays the center and power forward positions.

American professional basketball player was born in Portsmouth, Virginia. He was born on 25 September 1986. He is of African American ethnicity and has American nationality.

He has a brother and his name is Eugene Macklin. Since childhood, he started playing basketball.

Macklin studied at I.C Norcom High School in his hometown where he played for Norcom Greyhounds high school basketball team.

Later he joined Hargrave Military Academy in Chatham, Virginia where he was named McDonald’s All-American.

He attended Georgetown University in Washington, D.C. but transferred to the University of Florida.

Vernon Macklin has been active in the professional basketball game since 2011.

He started playing basketball professionally after being selected by Detroit Pistons in the 2011 NBA draft.

On 11 March 2012, he was assigned to the NBA D-League team Fort Wayne Mad Ants and recalled on 9 April.

On 19 August 2012, he signed a one-year contract with the Royal Hali Gaziantep of the Turkish Basketball League but was soon released from the team after playing five games.

On 18 December 2012, he joined the Rio Grande Valley Vipers of the NBA D-League but soon left and signed with Barangay Ginebra San Miguel on 14 February 2013.

He led the team, San Miguel to reach the Commissioner’s Cup final but lost the match. He joined Los Angeles Clippers for the 2013 NBA Summer League in July 2013.

On 5 December 2013, Macklin signed with Liaoning of the Chinese Basketball Association but left the team just after playing seven games.

In July 2014, he joined Orlando Magic for the 2014 NBA Summer League. On 26 September 2014, he signed with New Orleans Pelicans but was soon released from the team on 9 October.

On 22 November 2014, he signed with the Al Jaysh of Qatar and since then he is playing for the team Qatar.

In July 2016, he became a member of Mighty Sports which won a gold medal in the 38th William Jones Cup.

Vernon Macklin: Salary and Net Worth

He has accumulated a net worth of‎ $500 thousand as of 2022. But there is no information regarding his salary.

He has been successful in maintaining a good public image throughout his career and has not been involved in any controversies till date.


Vernon has a height of 6 feet 10 inches. His body weighs 103kg. He has black hair and black eyes. Furthermore, there are no details regarding his body measurements.