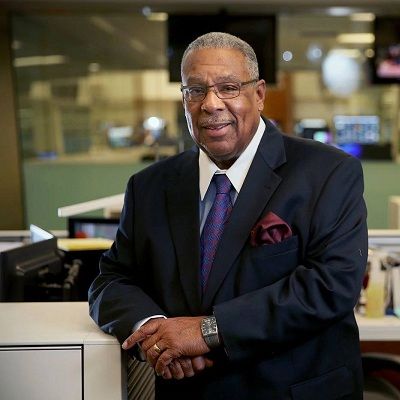 Vernon Odom is a married man. He is married to Wanda Motley. They fell in love while working together as she is a former Inquirer reporter in Philadelphia. They have two children, one of his son’s name isLane Odom. Currently, he resides in Chester County with his wife.

Who is Vernon Odom?

Vernon (Blue Moon) Odom is a former local Philadelphia American TV journalist. He has served for WPVI-TV in Philadelphia and during his tenure, he covered the stories from presidential debates to the MOVE disaster.

Vernon is 70 years old. He was born on September 16, 1948, in Biscoe, Arkansas. His father’s name is Vernon L. Odom Sr.who is an American civil rights leader and his mother’s name is Sadie Harvey Odom, who is a housewife. Vernon belongs to American nationality and African-American ethnicity. There is no information about his and siblings.

Odom received a Bachelor of Arts degree in Sociology and Political Science from Morehouse College. later, he continued his education at Columbia University.

On 17th May 1976, Odom started his career as a journalist for WPVI-TV in Philadelphia. Furthermore, he has covered from Presidential debates to the MOVE disaster of 1985, a plethora of major stories during his tenure ranging.

Moreover, he also hosted a weekly look at urban life, Visions in Philadelphia. Vernon was inducted into the Broadcast Pioneers Hall of Fame In November of 2004. On 14th December 2018, he retired from WPVI Philadelphia after 42 years.

Mr. Vernon Odom was awarded the History Maker award for his dedication to WPVI-TV/6abc in Philadelphia. He delivered an emotional story about what inspired him to work toward a career as a television broadcaster.

Odom has an approximated net worth of $5 Million. His wife, Motley has a net worth of $2 Million. Having a well-paid amount of net worth, he also makes an efficient amount of fortune from his other works which include interviews, endorsements, etc.

Being popular, this journalist has managed to stay away from rumors and controversies.

Vernon has a Grey hair color and brown eye color. Currently, we don’t have more information about his body measurements.

Former NBA player and ex-husband of Khloe Kardashin, Lamar Odom has given his life to God after he was miraculously saved due to God’s mercy!