Vernon Reid is married to Gabri Christa, a choreographer, and filmmaker. The couple tied the knot in the year 2000. Currently, they live on Staten Island.

There is no further information regarding his love life. 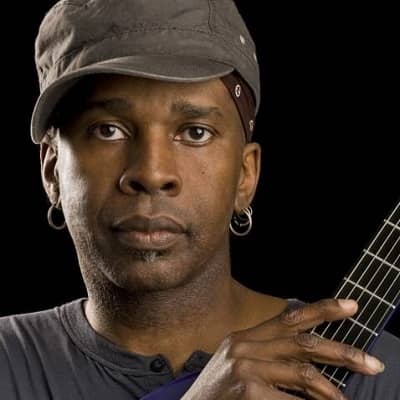 Who is Vernon Reid?

Vernon Reid is an American guitarist and songwriter who was born in England.

Reid is the founder and major songwriter of the rock band Living Colour. In 2003, Rolling Stone magazine ranked him No. 66 on their list of the 100 Greatest Guitarists of All Time.

Vernon was born on August 22, 1958, in England. As of now, he is 63 years old. Talking about his nationality, he holds an English identity.

He has not disclosed anything regarding his family background. Thus, we don’t have information on who his parents are.

Reid was born to Caribbean parents in London, England, but grew up in New York City. He went to Brooklyn Technical High School before enrolling at New York University.

He rose to popularity in the 1980s as a member of Ronald Shannon Jackson’s band. Smash & Scatteration, released in 1984, was a duo album with guitarist Bill Frisell.

Vernon is most recognized for his role as the lead singer of the band Living Colour. The group was first founded in New York City in 1983, but the personnel came together in 1985–86, and Reid headed the group for another decade.

Vivid, their debut album, debuted in 1988 and went double platinum. Its gold-certified successor, Time’s Up, was released in 1990.

They won two Grammy Awards in a row in the category of Best Hard Rock Performance. In 1995, Living Color disbanded, but revived in 2000.

Reid has worked on a number of other projects in addition to his work with Living Color. He released his debut solo album, Mistaken Identity, in 1996, and worked with choreographers Bill T. Jones on Still/Here and Donald Byrd on Jazztrain.

Reid also produced Ulmer’s subsequent albums, including No Escape from the Blues: The Electric Lady Sessions (2003), Birthright (2005), and Bad Blood in the City: The Piety Street Sessions (2007).

Reid also performed a series of Tony Williams Lifetime memorial concerts in Japan with Jack Bruce, Cindy Blackman, and John Medeski in 2008. Spectrum Road, a self-titled album by the duo, was released in June 2012 on the Palmetto Records jazz label in the United States.

Vernon launched his semi-monthly show on the streaming radio channel Home in 2017. Reid’s presentation, “An Underground Railroad of the Mind,” features him spinning vinyl recordings from his collection.

Reid has an estimated net worth of $5million which he collected from his work.

However, his annual salary, income, and earnings are not made public.

Throughout his successful career, Vernon has not been a part of any controversial news.

Currently, there are rumors regarding his professional and personal life. He has been avoiding unwanted scandals and rumors and has maintained a clean image to the public.

Vernon has not revealed anything regarding his body measurements. His height and weight measurements are unavailable to us at the moment.

He has a dark skin complexion with a pair of Black eyes. He has Black hair and he often wears a cap.

Also, he is active on Facebook with more than 64k followers.