Mexican TV and film actress and choreographer who has appeared in various films and television series.

This 54 years old talented actress is married to a 52-year-old actor and director Marius Biegai. The pair got married in Mexico in 1998. They are enjoying their happy 23 years of togetherness.

Together, they have one son together Lucca Biegai who has starred in a short, Floppy. Currently, they reside in Los Angeles, USA. 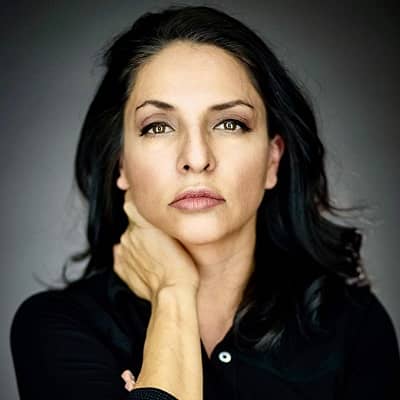 Who is Veronica Falcón?

Veronica Falcón is a Mexican TV and film actress and choreographer who has appeared in various films and television series. Likewise, she is famous for ‘Clara’ in the thriller tv series,  Perpetual Grace, LTD and ‘Marianne Sancar ‘ in the science fiction movie, Voyagers.

She grew up with her loving father and caring mother in her hometown. Her father is a former architect and her mother was a real estate broker. Likewise, she has a brother who is a Sports Journalist. She hardly talks about her parents. Maybe, Veronica does not want her family to get involved in the media which could lead to unnecessary rumors and controversies.

She is of Mexican nationality and her ethnicity is Mexican. Similarly, her birth sign is Leo. Talking about her education, she might have graduated from a prestigious school.

Veronica began her career from the movie Midaq Alley in 1995 as Kika. Likewise, she is the actress who is fluent in English and has acted in Mexican and English movies. In 2016, she moved to the USA to continue her career as a film actress. Moreover, she portrayed the role of Camila Vargas in three seasons of Queen of the South and Lupe. Her role in the series got huge recognition and much loved by the audiences and critics. She has acted in many TV series that includes:

and many more. Besides, TV series she has acted in the 2009 film Not Forgotten in the role of the character Reina. Similarly, she also appeared in the movie ‘Voyagers’ as Marianne Sancar. Some of her movies are:

Of all her acting, choreography, and dedication, why not she has a net worth of around $1M-$5M as of 2022. Likewise, she is a dedicated and hardworking person who focuses on her professional career.

Talking about her awards and accolades, she was honored with the Outstanding Performance in a Television Series Impact Award for her role as Camila Vargas in Queen of the South at the 22nd annual NHMC Impact Awards Gala in 2019. Before that, she was also nominated for the Diosas de Plata award in the category of best supporting film actress for portraying La Diabla in the 2013 film Besos de Azúcar.

There are no rumors and controversies about her personal life or professional life. Likewise, Veronica is a dedicated and respected personality who tries to mark her place in the showbiz industry.

Veronica stands 5 feet and 5 inches tall and weighs around 63 kg. Similarly, she has a slim-shaped body with 35-25-36 inches of measurements. She has black hair and dark brown color eyes.