Talking about his relationship details, Verse Simmonds is in a relationship with a pop singer and model, Jada Kingdom, known for her work in a music video, One Way. The couple started dating each other in 2019 and are living together.

Verse has shared his happy moments with Jada on his Instagram. Other than that, he has been secretive towards his relationship details and related news. 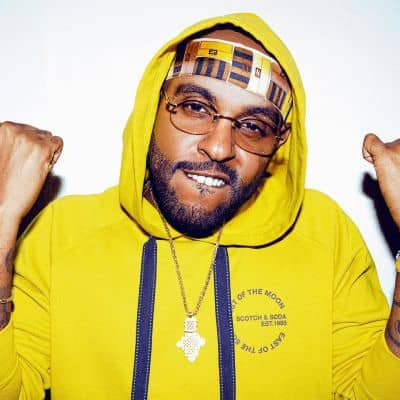 Who is Verse Simmonds?

Verse Simmonds is a well-recognized Puerto Rican rapper, singer, composer, record producer, and record executive. Simmonds has co-written and produced tracks such as “Man Down” by Rihanna, “Who Gon Stop Me” by Kayne West, and Jay-Z.

Verse Simmonds was born on 4 September 1980. At present, he is 41 years young star. Likewise, his birthplace is Puerto Rico.

Not much is known about his father and mother’s details, Verse has been secretive towards his family details. Moreover, he has not stated his sibling’s information in the public.

Talking about his nationality, Simmonds holds a Puerto Rican identity whereas his ethnicity is African-American.

Regarding education, the star completed his high school on the island of Saint Thomas. Then, he completed his graduation from the university in Florida.

Verse started working on his own solo material in 2009 and became associated as a solo artist with Cloud 9 and Raydar Management. He then released his first solo track on Interscope on 30 June 2009 named Buy You a Round(Up and Down).

Moreover, Simmonds released a mixtape in August 2009 named The Sextape Chronicles along with Raydar, Cloud9, Darkchild, and DJ Trauma. In the same year, his track was included on the R. Kelly album, Untitled. Later, he signed to Konvict Muzik serving as a singer-songwriter and producer in January 2011.

The rapper’s mixtape Sex Love & Hip Hop was hosted by Dj Drama in April 2012 with other stars such as Yo Gotti, Kelly Rowland, Snoop Dogg, and Akon.

A famed rapper, Simmonds has earned a handsome amount of money from his profession. He has been active in his profession from the year 2009 till the present.

It is reported that Verse Simmonds has an estimated net worth of $100k-$500k.

Verse has never been part of any controversial matter or rumors till now. The star has been preoccupied with his professional and private life.

It seems that Simmonds prefers enjoying his personal life and does not want to merge it with his professional life.

41 years young star, Verse has handsome looks and an admirable personality. He has not mentioned his exact height but seems to be nearly 6 feet tall.

Furthermore, Simmonds has black eyes whereas his hair is black.

Regarding his social media presence, Verse Simmonds is an active personality on social media. Verse has more than 172k followers on his official Instagram account @versesimmonds.

He is also active on Twitter with around 35.3k followers.

Moreover, Simmonds is also available on Facebook with nearly 113k fans and supporters.