Vicki Gunvalson was once a married woman. At first, she married Michael J. Wolfsmith at the age of 21. They have two children who are Briana Culberson (1986) and Michael Wolfsmith (1985). When she was 29 years old, they divorced.

After that, she married Donn Gunvalson and founded Coto Insurance and Financial Services. They divorced in the year 2014.

At present, Vicki is engaged to Steve Lodge. She officiates this news on her Instagram. 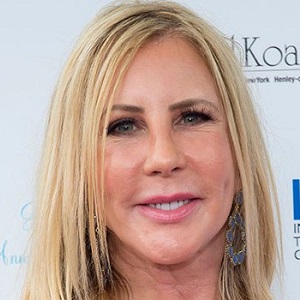 Who is Vicki Gunvalson?

She is known for her role as a housewife in the Bravo reality television series The Real Housewives of Orange County since its first season. Similarly, she is the founder of Coto Insurance.

She was born on 27th March 1962 in Chicago, Illinois. Currently, she is 59 years old. She is the daughter of William J. Steinmetz and Joanne Steinmetz. Similarly, she has three sisters Lisa Bussenger, Kathy Moloney, and Kim Steinmetz. She also has a brother named William Steinmetz.

Likewise, her father owned a construction company and her mother was a housewife. Her nationality is American but her ethnicity is unknown.

It is an American reality series that premiered on March 21, 2006, on Bravo. Similarly, it has aired thirteen seasons and focuses on the personal and professional lives of several women residing in Orange County, California.

Likewise, she is the founder of Coto Insurance. She founded it with Her ex-husband Donn Gunvalson. She got her insurance license in California.

The estimated net worth of Vicki is around $7 million. Similarly, it is known that she made around $500,000 per season of The Real Housewives of Orange Country.

Recently in May 2020, she bought a house where she can live after her retirement.

In the show The Real Housewives of Orange Country, Vicki accused Kelly Dodd of using cocaine. Due to which Kelly Dodd announced that she would not return to the show for season 14 with Vicki.

But in December 2018, Radar Online reported that Dodd would be returning to the series.

Talking about Vicki Gunvalson’s body measurements, she has a height of 5 feet 6 inches and her weight is around 60kg. She has blonde hair and blue color eyes.