Updated On November 29, 2022 | Published By: Donnie Smith
Share this
Single 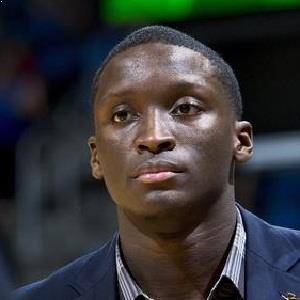 I feel like I have another level every year that I start a new season of basketball. If I continue to keep growing, and make everything consistent, I'm going to get better and better each year.

Growing up, you always want to hang with your dad - go fishing or whatever. But my dad was always working, so we never really had time for that. I think I kind of learned to accept it.

What is the relationship of Victor Oladipo?

Reflecting on the personal life of Victor Oladipo, he is possibly single. There isn’t any information regarding his romantic relationship affairs.

His personal life isn’t in the limelight as his career path is. He has kept his personal life far from the tabloids. There isn’t any solid proof that leads toward his married lifestyle and children.

Being a celebrity, his personal stuff is always a matter of discussion and interest to the public. Due to the lack of much information about him, his fans are always curious to know more about him.

Who is Victor Oladipo?

He is best known as the player from Oklahoma City Thunder of the National Basketball Association (NBA) wearing jersey number 5. He often plays from shooting guard and point guard positions.

What are the birth facts of Victor Oladipo?

Victor Oladipo was born on 4 May 1992 in Silver Spring and raised in Upper Marlboro, Maryland. He is of African American ethnicity and has an American nationality.

VIctor is the son of Joan Amanze Oladipo and Christopher Oladipo. He was born and named as Kehinde Babatunde Victor Oladipo.

His mother worked as a nurse and father as a health executive. He has three sisters, Kristine, Kendra, and twin sister Victoria.

Kendra became deaf when he was in second grade. He studied at DeMatha Catholic High School in Hyattsville, Maryland, and attended Indiana University.

Talking about the career journey of Victor Oladipo, he has been active in the professional basketball game since 2013 and he is still engaged in it. He started playing basketball professionally after being selected by the Orlando Magic in the 2013 NBA draft.

On 8 July, he signed a rookie contract with the Magic. During 2013-14 seasons, he recorded his first career triple-double with 26 points, 10 rebounds and 10 assists against Philadelphia 76ers. He finished second in the Slam Dunk Contest.

On 23 June 2016, he was traded to Oklahoma City Thunder where he recorded 10 points in his debut game against the Philadelphia 76ers. He had missed most of his matches due to his injuries. Since 2016 he has been playing for the team Thunder and he is still engaged with the Thunders.

He was traded to the Houston Rockets in Janua 2021 but was traded back to the Heat two months later. He had season-ending surgery after only four games with Miami and returned to the field in March 2022.

Victor Oladipo: Salary and Net Worth

Rumors were that Victor has completed the trade in Oklahoma City was going to transfer.

There were controversy and negative criticisms against Victor when he did not stand up during the national anthem.

How tall is Victor Oladipo?

His hair color and eye color is black. His shoe size is unknown.