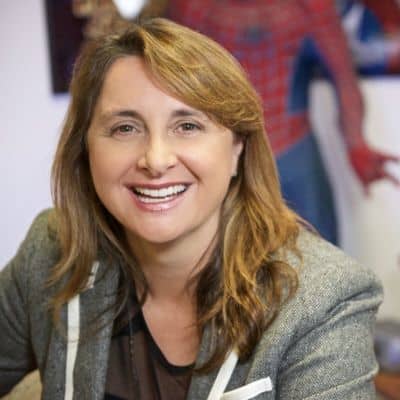 What is the relationship of Victoria Alonso?

Victoria Alonso is bisexual. Talking about her love life, Alonso is married to Imelda Corcoran. Imelda is a well-known actress and designer famous for Two Hands(1999), Lost(2004), and A Perfect Ending(2012).

The couple has adopted a daughter named Olivia and she is 8 years old.

Having said this, Alonso has not revealed her relationship details in the public and media till now. It seems she is very private in nature and prefers to stay out from media life.

Who is Victoria Alonso?

Victoria Alonso is a well-recognized Argentine-American film producer. Alonso is widely famed for her role in Iron Man(2008), Kingdom of Heaven(2005), and Avengers: Endgame(2019).

Presently, she is the Executive Vice President of Physical Production at Marvel Studios.

Victoria Alonso was born on 22 December 1965. At present, her age is 56 years old. Likewise, her birthplace is Buenos Aires, Argentina.

Not much is known about her father and mother, Victoria has been secretive about her parents’ details. Moreover, she has not disclosed her siblings’ information to the public.

The producer mentioned in an interview that she had a very tough childhood. Being grown up in a military dictatorship, people were getting taken away and killed.

She added her father died when she was just six years old and her mom was a high official in the ministry of education.

Talking about her nationality, Alonso holds an Argentine-American identity whereas her ethnicity is Caucasian.

Regarding education, the celebrated producer took her graduation degree from the University of Washington.

Being a native of La Plata, Victoria left her city at the early age of 19 years old and moved to New York to pursue her career. Later she shifted to Los Angeles.

Initially, she faced a lot of rejection in the film industry. Alonso then decided to film behind the cameras. She worked for four years at the VFX powerhouse Digital Domain.

Victoria then joined Marvel being the company’s executive vice president of visual effects and post-production, doubling as co-producer on Iron Man, a role she reprised on Iron Man2, Thor, and Captain America: The First Avenger.

Since then the producer has been known for Marvel’s Iron Man 3, Captain America: The Winter Soldier, and Captain America: Civil War, Thor: The Dark World, Avengers: Age of Ultron, Ant-Man, Guardians of the Galaxy, Doctor Strange, Guardians of the Galaxy Vol. 2, Spider-Man: Homecoming, Thor: Ragnarok, Black Panther, Avengers: Infinity War, Ant-Man and the Wasp, Captain Marvel and so on.

Recently, she was notable for her work on Avengers: Endgame, WandaVision, The Falcon and the Winter Soldier, Black Widow, and so on.

From her all contributions, Victoria has become a prominent voice in Hollywood as a producer. Alonso was ranked as one of the Hollywood Reporter’s 2017/18 Women in Entertainment Power 100.

Moreover, she was the 2015 honoree for the Muse Award for Outstanding Vision and Achievement from the New York Women in Film & Television.

Alonso also became the first woman to be presented with the Harold Lloyd Award from the Advanced Imaging Society.

Argentine producer, Alonso has earned a handsome amount of money from her profession and lives a luxurious lifestyle. She has been active in her profession from the year 2000 till now.

It is reported that Victoria Alonso has an estimated net worth of $1 million.

However, the prominent producer has not disclosed her exact salary, earnings, and assets details till now.

Victoria has never been part of any controversial matter or rumors till now. The producer has been preoccupied with her professional and private life.

It seems that Alonso prefers enjoying her personal life and does not want to merge it with her professional life.

56 years old personality, Victoria Alonso has pretty looks and an admirable personality. She has not revealed her exact height but seems to be nearly more than 5 feet long.

Furthermore, Alonso has hazel eyes whereas her hair is blonde.

Nevertheless, the famous producer has never mentioned other physical details in the public yet.

Regarding her social media presence, Victoria Alonso is a silently active personality on social media. Victoria has more than 1k followers on her official Instagram account @victoriaalonso76.