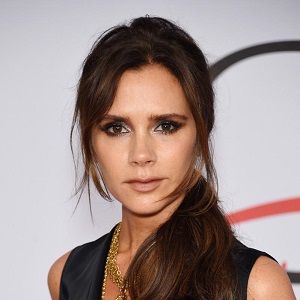 I love fashion, and I love changing my style, my hair, my makeup, and everything I've done in the past has made me what I am now. Not everyone is going to like what I do, but I look back at everything, and it makes me smile

I think the sexiest thing about a woman is confidence, but confidence in a humble way, not in an arrogant way. Sense of humor is definitely important. And sunglasses always hide a multitude of sins. Sunglasses and a great pair of heels can turn most outfits around.

What is the relationship of Victoria Beckham?

Victoria Beckham is a married woman. She is married to the famous English football player, David Beckham. The couple first met each other in the mid-1990s in a charity football match.

But began dating each other in 1997. They announced their engagement in 1998. David and Victoria got married on 4 July 1999.

The couple together has four children named Brooklyn Beckham, Harper Seven Beckham, Romeo James Beckham, and Cruz Beckham. David and Victoria have been married for almost 19 years now and their relationship is going very well.

Previously, Victoria was engaged to Mark Woods in 1993. She began a relationship with Corey Haim in 1995, which ended on mutual terms.

Who is Victoria Beckham?

Victoria Beckham is an English businesswoman, fashion designer, model, actor, and singer. Victoria Beckham was one of the lead vocalists of the all-female pop group Spice Girls.

She showed her acting skills in one of the episodes of Ugly Betty. Victoria is the winner of Best Dressed International Female at “Elle Style Awards 2003” in Madrid, Spain. She came to fame also after being the wife of famous English football player David Beckham.

Victoria was born on 17 April 1974, in Hertfordshire, England, UK. Her nationality is British and she is of mixed(English and German) ethnicity.

Her birth name is Victoria Caroline Adams. She is the eldest daughter of Jacqueline Doreen(mother) and Anthony William Adams(father).

Her mother is a former insurance clerk and hairdresser while her father worked as an electronics engineer. She has two siblings named Louise Adams(sister) and Christian Adams(brother).

She was educated at Jason Theatre School. In 1991, she joined Laine Theatre Arts in Epsom, Surrey, and studied dance and modeling. She attended St. Mary’s High School in Cheshunt.

Victoria decided to pursue a musical career in 1980. After college graduation, she became a member of a band called Persuasion.

She made her debut as a model at London Fashion Week on the catwalk for Maria Grachvogel in February 2000.

In 1994, she joined the all-female group, the Spice Girls. At that time, she became widely popular as Posh Spice. She was joined in the Spice Girls by Geri Estelle Halliwell, Melanie Janine Brown, Emma Lee Bunton, and Melanie Jayne Chisholm. With the band, she has released several top-ten UK singles during her solo career, including “Out of Your Mind”.

In 2002, Beckham signed a contract with Telstar Records and 19 Management. She has participated in five official documentaries and reality shows.

In the past decade, Beckham has become an internationally recognized style icon and fashion designer.  She was diagnosed with meningitis at the end of the summer of 2000. She was voted Best Dressed Woman by British “Prima” magazine in 2002 and 2003. Victoria has also won other several awards and honors.

In January 2000, a tip-off to Scotland Yard detectives exposed a plot to kidnap Victoria and Brooklyn Beckham and hold them at a house in Hampstead, London. The family was then moved to a secret location, but no arrests were made.

Later in March 2000, she received a death threat before performing at the Brit Awards with the Spice Girls. In November 2002, five people were arrested after another plot for her kidnap was infiltrated by a tabloid newspaper. All charges were dropped after a witness was deemed unreliable.

Also get to know more about the birth facts, education, career, net worth, rumors, height, and social media of different personalities like Lindsay Lohan and Nicky Hilton Rothschild.